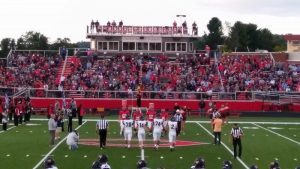 For only the second time ever, the Virginia High Bearcats meet the Wise-Central Warriors on the gridiron Thursday night. Last year’s matchup in Wise saw the Bearcats roll to a 31-14 victory. This year’s contest features two very different teams.

The Warriors are led by former Virginia Tech Hokie football standout, head coach Luke Owens. Luke has a very young, but hungry team, led by junior playmaker Isaiah McAmis, who is also a standout basketball player for the Warriors. Wise-Central (1-1) started the season with a win over Eastside, then after their bye week, lost 54-0 to the very talented Ridgeview Wolfpack.

In his sixth season, Virginia High head coach Michael Crist leads a very experienced group. The Bearcats (2-1) won their first two games of the season against Tazewell and John Battle. They look to bounce back from a hard fought loss against their interstate rivals, the Tennessee High Vikings.

The Bearcats are led by their senior quartet of Aaron Rose, Austin Davidson, Jamie Lathrop and Colton Ratcliffe.

Rose (6’0 210) has established himself as one of the top two-way players in 2A this season. After being voted a two-time All-District and first team All-Region linebacker in 2016 and 2017, Rose has become the primary running back for the Bearcats as well. Through three games, he has 443 yards and five touchdowns on only 44 carries. Rose also leads the Bearcat defense with nearly 30 total tackles.

Lathrop, in his second year as the Bearcat quarterback, has thrown for over 350 yards and ran for nearly 100 yards. He’s been responsible for four total touchdowns, while slowly becoming one of the better dual threat quarterbacks in Region D.

Davidson is in his second year as a special teams ace for the Bearcats, while emerging this year as a lockdown cornerback. Davidson, who wears #21 after his father who was a standout multi-sport athlete at Powell Valley in the early 90s, averages over 30 yards per kickoff return, with one touchdown. Austin also leads the Bearcat secondary in interceptions.

Ratcliffe wears many hats for the Bearcats. So far this season, he has lined up at cornerback, linebacker, wide receiver, running back, kicker and punter. Colton has been a productive player for the Bearcats at every position he has played. It would be a difficult task to find another player in the region, as versatile as Ratcliffe.

Other Bearcat players to look out for;

In preparation for the Warriors, coach Crist knows what his team must do to come out victorious.

“Moving forward to Wise-Central we need to get back to day one fundamentals that will carry us through the season,” Crist said. “They are a well coached team that is young, but looks to have improved each week regardless of their scores.  We have to eliminate big plays defensively and reduce our turnovers offensively.”

The Bearcats hope to take another step towards becoming a respected team in the region. The young Warriors look to continue their progress and gain valuable experience all while hoping to avenge last year’s loss to VHS. Luke Owens and the gang look to show the rest of the region that Wise-Central is a team that is not to be overlooked.

*Featured image above, courtesy of the WONDERFUL LeAnn Rose*

On a sidenote, safe travels to all players, coaches, and fans of all teams ahead of Hurricane Florence.

Don’t forget Bearcat fans, you can listen to ALL Bearcat football games on your favorite device at spreaker.com/bearcatradio