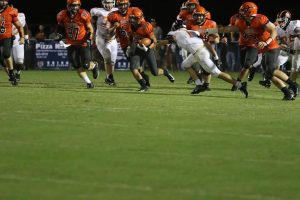 It didn’t take long for Union Bear senior running back Avery Jenkins to make his mark this season. In the opener, the speedster carried the ball 11 times for 227 yards (20 YPC) in route to Union’s 35-20 win over J.I. Burton and also being named the inaugural CoalfieldSports.com Offensive Player of the Week.

Jenkins was electric in all phases of the game. Before breaking off an 80-yard touchdown run, Jenkins had two long kick returns negated that would have put him over 300 all-purpose yards. .

Like any running back would in a big contest, Jenkins thanked his offensive line saying, “The blocking was on point against Norton.”

Much to your surprise, the Bears tailback does not have a NFL running back he tries to immolate during his play.

“I don’t have any NFL RB models,” Jenkins said. “I just play my own game.”

When you possess the speed that this young man does, playing his own game seems to be just fine.