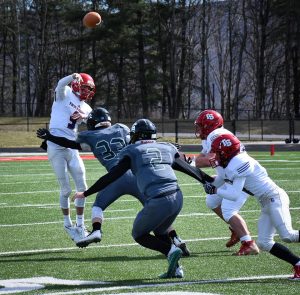 After slipping and sliding their way by Hurley last week in the mud, the Eastside Spartans moved their Cumberland clash with the Twin Springs Titans to the turf surface at Wise Central High School. The turf proved beneficial to both offenses as the Spartans outlasted the Titans 43-30 in a game that saw the two squads combine for 52 points in the second half. 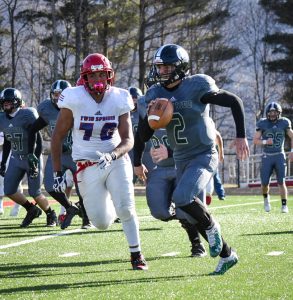 Will Stansberry has been a staple for Mike Rhodes and the Spartan football team over the years, but on Saturday the senior signal caller was nearly Superman as he accounted for four touchdowns and nearly three hundred yards of total offense.

Saturday’s game was the first game of the 2021 campaign for the youthful Titans who were hit hard by graduation. The Titans opening drive was one they’d soon want to forget as it resulted in a fumble that gave Eastside possession inside the Titans 10 yard line. Just moments later, Nick Raymond cashed in on a 6 yard touchdown run to put the Spartans up 7-0. Twin Springs would seemingly brush off the turnover as the Titans put together a two play drive the ended with a 50 yard touchdown reception from Mason Elliott to Conner Gilmer. Ryan Horne added the two point conversion run and the Titans held an 8-7 lead that they would carry into the second quarter.

The only scoring of the second quarter would take place on an 11 yard strike from Stansberry to receiver Eli McCoy to give the Spartans a 13-8 lead at halftime. The third quarter would turn out to be the Titans kryptonite as the Spartans would accumulate 22 points in the quarter and hold the Big Red Army scoreless. Stansberry had back to back touchdown runs that covered 12 yards and 70 yards to push the lead to 28-8. His second touchdown pass to McCoy gave Eastside a commanding 35-8 lead going in to the fourth and final quarter. 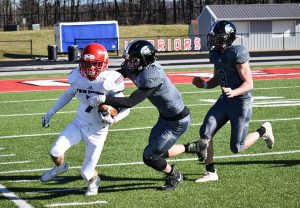 Twin Springs would attempt a comeback behind an Eli McCoy of their own. Titan running back Eli McCoy scored on a 30 yard run and a 12 yard run on back to back possessions as the lead was trimmed to 35-24 with 7 minutes remaining in the contest. Just as the Titans had life, Ethan Hill took it right back. The Spartan tailback raced 33 yards to paydirt to extend the lead to 43-24 after a two point conversion run from Stansberry. The Titans would throw one last punch as Ryan Horne added a 4 yard touchdown scamper to close out scoring. 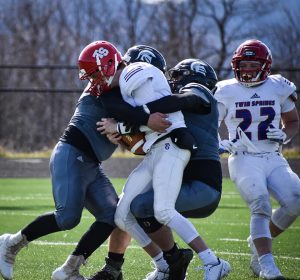 Twin Springs falls to 0-1 on the season and will face off against Castlewood (1-1) this Thursday at Twin Springs High School. Eastside moves to 2-0 and will host the Rye Cove Eagles (0-2) this Friday night.