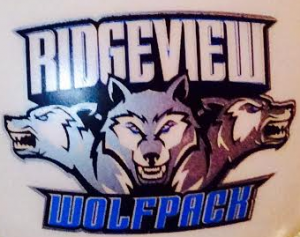 While the sky was sputtering rain drops on Saturday afternoon inside Five Star Stadium, the Ridgeview Wolfpack offense was raining touchdowns. The Pack raced out to a 35-0 lead at halftime and never looked back in a 42-0 throttling of the home standing Lee High Generals.

Senior quarterback Nick Phillips had himself a day as he accounted for 5 total touchdowns in the Mountain 7 victory. Phillips tossed 4 scores and ran for another as the unblemished Wolfpack offense also got big games from Koda Counts, Colt Fletcher and Trenton Adkins. Ridgeview tallied nearly 400 total yards of offense as a number of players contributed to the action. This week’s win is a welcoming sight to the Pack after their loss to Central last week.

“Our coaches, they did a great job us helping us realize our mistakes from last week and how we could get them fixed this week.” Said quarterback Nick Phillips. “We worked really hard in practice and came out and played as a team. I’m proud of this team for stepping up and showing what they had in them.”

Philips tossed two first quarter touchdowns to push the lead to a quick 14-0. Phillips hooked up with Koda Counts for the first score and then hit Colt Fletcher for a 61 yard touchdown pass with a little over a minute remaining in the first quarter. Adkins would add to the lead as he scored on a 39 yard run just seconds in to the second quarter to extend the lead to 21-0. Counts would find himself on the receiving end of his second and  third touchdown catches of the half as the Pack took a 35-0 lead in to the half. Phillips would add the finishing touches as he scored on a 1 yard run early in the fourth to cap off scoring for Ridgeview. Tanner Laster, who completed over 50 percent of his passes last week against Union, was only 3 of 11 for 16 yards. Lee only produced four first downs and 65 total yards of offense. Phillips was quick to give credit to his teammates and coaches when asked about the teams performance.

“My line stepped up and done a tremendous job. My receivers busted their butts to get the ball but one of the biggest things that impact my performance is my coaches. Those guys always talk me up and instill confidence in me. They really believe in me.” 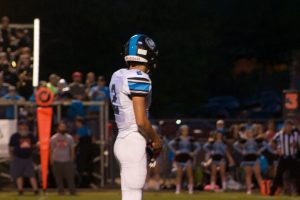 Lee falls to 0-2 and heads into a bye week before traveling to Abingdon March 12th. Ridgeview moves to 1-1 on the young season and welcomes in the John Battle Trojans (1-0) to the Ridge on Friday, March 5th.