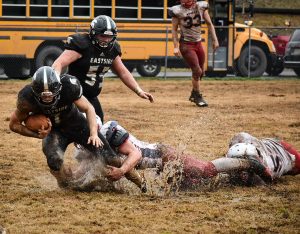 On a muddy and rain soaked field at Carl McConnell Stadium, the big boys in the trenches dominated on both sides of the ball for the Eastside Spartans as they slid past the Hurley Rebels 15-0 in their season opener.

Coming off of a 360 plus yard rushing performance last week at Rye Cove, Hurley’s feet seemed to be stuck in the mud, literally, in Saturday’s matchup. Defensive linemen, Braedon Hensley and Trevor Sanders, combined for thirty tackles in limiting the Rebels to 55 yards of total offense. Bryson Shepherd was also wreaking havoc for the Spartan defense as he tallied 10 tackles for Coach Mike Rhodes defense, which held John Matt Justus to under thirty rushing yards after he posted 191 yards and three touchdowns in last weeks game. 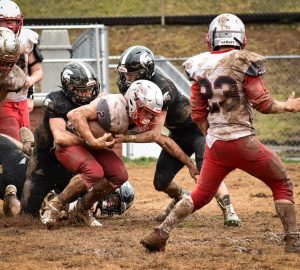 After a scoreless first quarter, Eastside got on the board first when quarterback Will Stansberry called his own number and scored on a 12 yard keeper with a little over ten minutes remaining in the first half. After holding a 6-0 lead, Eastside took advantage of a bad snap on a Hurley punt. The swarming Spartan defense was able to bring the punter down in the end zone for a safety and pushed their lead to 8-0. As the defense kept applying pressure, the offense was able to bust loose. Nick Raymond sprung free for an 18 yard touchdown run and the lead swelled to 15-0 with 2:20 remaining until halftime. 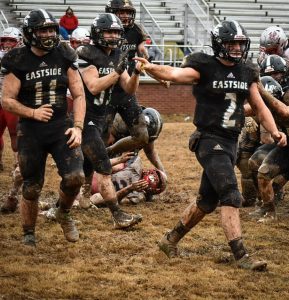 The Spartan defense would hold strong once again in the second half and complete the shutout to open their season. Braedon Hensley completed a monster game for Eastside as he totaled 19 tackles and 2 sacks.

“We have built one of the strongest defensive lines around, I think.” Noted Hensley. “We came in with the mentality to win, we played fast and we played physical. It was the entire defense and not just the line, we were all flying towards the line of scrimmage.”

Trevor Sanders added 11 tackles on the day. Nick Raymond led the ground attack with 88 yards on 18 carries with a touchdown. Ahren Lee contributed 42 yards on 5 carries.

Eastside will look to move to 2-0 next week as they host Twin Springs, who will be opening their season. The Spartans defensive gem has them chomping at the bit to open up district play.

“A performance like this really motivated me and my my whole team.” Added Hensley. “We’re going to come with the same energy against Twin Springs, we’re just getting started.”

The Titans are coming off of a bye week while their week one game with Twin Valley was postponed due to the Panthers being in quarantine. The Spartans won last year’s contest against the Titans 20-0.

Hurley moves to 1-1 on the season after their first two games were on the road against Cumberland District opponents. The Rebels will host Honaker to open up Black Diamond District play next week at The Cliff in Hurley. Honaker has started the season off 0-2 after losses to Castlewood and Lebanon.