The morning rain made for a muddy game Monday night in Chilhowie between the Warriors and the J.I. Burton Raiders. The weather no doubt played a major factor in the game and played right into the hands of the Chilhowie Warriors. Led by a stout defensive effort from three seniors, Chilhowie held the electric Burton offense to only 145 yards of total offense and forced two Raider turnovers. Lineman Coby Crutchfield, along with linebackers Gabino Silverio and Jordan Williams led a stingy attack that held Burton speedster Esau Teasley in check.

Burtons defense matched Chilhowie for the most part but the turnovers and a big special teams play from D.J. Martin set up the only touchdown of the game. Leading 3-0 at the half, Chilhowie stretched their lead to 9-0 after Martin called his own number on a quarterback run up the gut for a 14 yard touchdown. Burton would lead 9-0 late in the third, which would stand throughout the remainder of the contest. 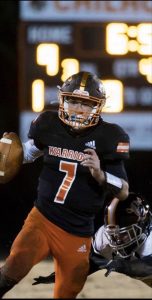 Martin led Chilhowie with 46 yards rushing on 11 carries while Jon Gilley contributed 41 yards on 10 carries for the Warriors. Esau Teasley led Burton with 33 yards on 16 carries while Jaymen Buchanan threw for 38 yards in the loss. Silverio led Chilhowie with 11 tackles while Crutchfield added 10 and Jordan Williams added 8 tackles in the win. Chilhowie is set to travel to Marion this Saturday while Burton goes in to an important bye week to prepare for a showdown with Castlewood on March 5th.

Chilhowie avenged a 12-7 loss to the Raiders in last years regional playoffs at Carl Smith Stadium on the campus of UVA Wise. The two teams have quietly formed a good little rivalry as they have produced some of Southwest Virginia’s best games over the past few years. Another playoff rematch between the two teams could occur this season just as it did last season.