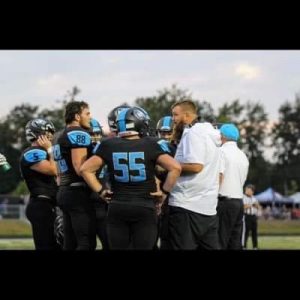 Tiller is excited to get started with his tenure in leading the Wolfpack.  “I am ready to get going and wish we could start drills right away,” said Tiller.  “I will make sure the players are getting physically and mentally prepared for whenever we are allowed to start.”

In what has become today’s ‘new norm’, the challenge with not only Tiller but is with all coaches in any competitive sport, is how to communicate with players and staff during this time of quarantine due to the coronavirus pandemic.  Tiller is prepared for the challenge.

“We will have to communicate through a couple of different platforms,” explained Tiller.  “We will utilize social media and Hudl and we will also be contacting groups through video conferencing.  We can do a lot with at home workouts and can also implement some base offense and defense systems through digital playbooks.”

Tiller most recently served as a position coach under Mullins on the Wolfpack staff, but brings years of coaching experience to the head ball coach position.

Tiller had stints as an assistant at now defunct Haysi High school, Castlewood and Grundy before embarking on his first head coaching experience at Fort Chiswell high school, being hired as the coach of the Pioneers in 2015.

After a shaky start in his first year at the rural school in Wythe County, Tiller showed remarkable improvement and poise in 2016.  The Pioneers achieved a 9-4 mark in the campaign and reached the Class 1 quarterfinals, falling to Mountain Empire District rival Galax.

Tiller’s success continued into the 2017 season, leading Fort Chiswell to their second consecutive playoff berth.  The Pioneers compiled a 7-4 record in 2017 falling to Giles in round one of the playoffs.

Tiller left Fort Chiswell after the 2017 season to return home to Dickenson County.  The Haysi High school graduate brings a 16-18 career mark to the mountain top of Rose Ridge.