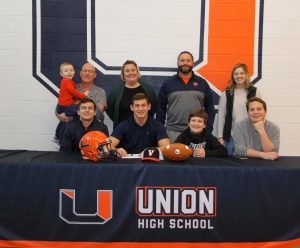 Fans who spent their Friday nights at Bullitt Park will now be able to make the 17 mile trek from Big Stone Gap to Carl Smith Stadium in Wise to watch Mason Polier on Saturday afternoons for the UVA Wise Cavaliers. The 6’2 220 pound Polier, who starred on both sides of the ball for Union as a running back and linebacker, signed with Wise on February 5th at Union High School.

“I visited a lot of places in this recruiting process and Wise just eventually came to the top.” Stated Polier. “I think it’s the best fit for me, and I felt most at home there and think it’s the best place for me to succeed. I took my first visit up there this past fall when they played Chowan. It was a great atmosphere, and I really enjoyed it. I enjoyed the facilities and it’s just a great campus. My family has always been there for me and they’ve always supported my decision no matter what. They’ve told me that it didn’t matter if I was playing out on the west coast somewhere that they would be there to watch and support me. Ultimately, I’m excited it’s just a short drive for them so it isn’t a strain on my family to travel. All the schools in the SAC (South Atlantic Conference) are pretty close so they won’t have to drive very far when we play on the road.” 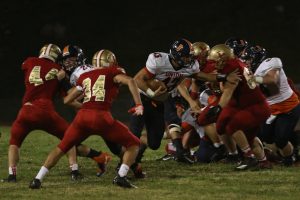 It was a remarkable career for Polier at the high school level as he won 75 percent of his games over a four year span in Ben Hur and Big Stone Gap. Polier was part of a Lee High Generals team that went 6-5 his freshman season before bowing out to Union in a first round playoff game. His sophomore season he transferred to Union where they would rack up 31 wins in his three seasons with the Bears. In his senior season alone, Polier racked up 130 tackles, 15 of those were for loss, forced 4 fumbles, notched 3 sacks and recorded 3 interceptions. One of which was returned for a touchdown against Graham in a regular season triumph over the G-Men in Bluefield. On offense, Mason was just as affective as he rushed for 1,808 yards, averaged nearly 7 yards per carry and recorded a single season school record of 30 touchdowns. Polier finished his career with 368 tackles, 54 of which were for loss and recorded 10 sacks. His senior year, he was named Mountain 7 defensive player of the year and the 2019 Bristol Herald Courier defensive player of the year. 1st team all Mountain 7 running back and linebacker, 1st team honors as running back and linebacker in Region 2D and 2nd team all state as a running back and linebacker. That is something that will be a tough task for Union head coach Travis Turner to replace but Turner is thrilled to see his former star head to the next level.

“Mason had a great career here at Union, played with intensity and played the game the right way, the way it should be played.” Noted Turner. “He is a great fit up at Wise and he’s got a chance to work himself in to playing very quickly and being a contributor right away. He never let his emotions get the best of him. We could always count on him being focused and ready to play every Friday night.”

“Coach Turner has been great since day one. He told me continuously throughout the years to focus on the right fit for me and he’s told me throughout the whole process that if I needed anything to let him know. Coach Edwards and Coach Bostic have been helpful, too. I’ve been in their ears asking what they thought about this school or that school, just trying to get as much information as possible to make the best decision because ultimately you only have one decision and you’ve only got one shot to play college ball.” 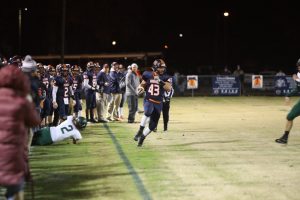 Polier races down the sideline on Senior night against John Battle at Bullitt Park as part of his 77 yard touchdown run. Polier would finish the night with 3 touchdowns on only 9 carries and 216 rushing yards.

“I think he’ll definitely contribute on special teams right away.” Added Turner. “He was a dominant player on both sides of the ball. He was a great leader on offense and defense and then off the field, he was a leader off the field as well. He’ll be working probably at inside linebacker, a position that he plays at a very high level, and I’m sure they’ll throw him on some special teams.”

Polier isn’t just a name known on the gridiron, he’s one of the top wrestlers in the state of Virginia. He brought home a class 2 state championship last season in the 195 pound weight class and has moved up to the 220 pound weight class this season. He is en route to bringing home another state championship as he recently won a regional title in his weight class. The road will be a testy one though as last years state champion and last years state runner up have returned and will surely be worthy competition for Polier on his return quest to Salem. Polier also stands out in track and field and the classroom. He sports a 3.69 grade point average and is planning on studying both sports management and exercise science at UVA Wise. 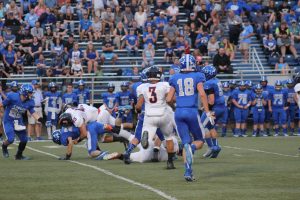 Polier racks up one of his 15 tackles for loss on the season against Letcher Central in a September contest in Whitesburg.

Starting football up when he was in the third grade, being an athlete is something that is in Poliers DNA. Mason’s dad, Nick, played two years at the college level for the Washington State Cougars and his uncle Eric Satterfield was a standout football player for both Lee High and Emory & Henry College. Nick is also his wrestling coach and has been right there for his son to lean on through the whole recruiting process. Something that Nick states has changed so much since the late 80’s and early 90’s.

“You know, coaches now can just send a player a message on Twitter or whatever and can reach out to them so many ways through social media. When I was going through the process, it all went through your high school coach, which Wise has done that.” Said Nick. “Wise talked with Travis a lot and really took all the right steps in reaching out to Mason. You can really tell that he was wanted up there. Plus, you know it’s nice to be able to just drive 15 minutes up the road and watch a home game. We told him to just find the place that was right for him, where they want you and you’re not just a number, go somewhere where they want you and you’re going to be able to help the team but I think he made a great decision based on what was best for him.”

Wise, who has just recently moved to the South Atlantic Conference from the Mountain East Conference, where they had been since they moved to Division II back in 2015, posted a 2-9 overall record last season and a 1-7 record inside the SAC. The two victories came against Chowan and fellow SAC foe, Catawba. 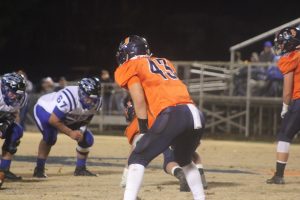 With a good recruiting class coming in for next fall Polier thinks the Cavs will have what it takes to compete at the top of the conference next season.

“I feel like under Coach Damron we have some really good guys coming in and I think we’re going to have a lot of pieces to be successful, plus there are some players returning that are really talented as well.” Stated Mason.

“I think them moving up to the SAC conference was a eye opener, in terms of they needed to get bigger and faster and they felt like he really fit the mold of what they were looking for. They were very upfront about wanting him and how he was going to be a great fit for their program.” Added Nick. 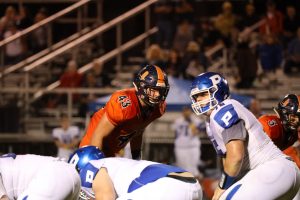 Polier stares into the Paintsville backfield in a matchup with the Tigers in October at Bullitt Park.

Other schools were lined up at Masons door but ultimately it was Dane Damron and the Cavs who were rewarded with the Big Stone Gap native. Schools like the University of Charleston, VMI, William & Mary, Appalachian State, Eastern Kentucky, and a handful more of others, were all in the running. Polier was leaning heavily towards Appalachian State before the Mountaineers head coach Eli Drinkwitz left in early December to take the head coaching position at the University of Missouri. Eastern Kentucky, which is where Union head coach Travis Turner attended after he left Virginia Tech, made a late push but didn’t want to visit until March, something that didn’t make Polier feel comfortable.

“EKU wanted to visit with me in March and I just didn’t want to wait that long because I knew I could be at risk of losing some of my other offers.” Stated Mason.

You’ll be able to catch Mason and the Cavs as they kick off their season in early September. You may want to get there early and do some tailgating as the Union faithful travels well. The whole town of Big Stone Gap may be quiet after they catch breakfast at Four Seasons before heading up to Carl Smith Stadium on Saturday afternoons.

“Having him play close to home is a big deal.” Said Turner. “There is going to be plenty of Union fans up there watching him play on Saturdays. He’s going to be missed on the football field, wrestling mat, track and field team and especially the school building. Just the true definition of a student athlete. He works so hard in athletics and academics, he’s been an absolute pleasure to coach him and watch him develop in to a fine young man over the last three years.”

Fans would line up after each contest to speak with the Union star. From young kids to senior citizen folks, Polier would not turn a shoulder as each and every fan was spoken to or they got their picture taken with the kid in a sweat soaked jersey that held some grass and blood stains. In a community with such a rich high school football tradition that has saw their share of stars, number 43 falls right in line with them. Southwest Virginia football won’t see many more players with the competitive spirit and the drive to win like Mason Polier.

“You know to represent this community is a true honor. The fan base here is terrific and the support is outpouring. They always support us and they always tell us how proud of us they are. I can’t wait to see all the fans come out and show support at Wise.” 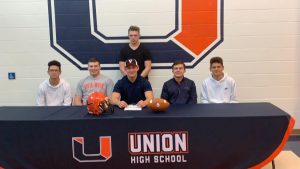 All picture credit goes to Scarlett Mullins and Robert Ryan