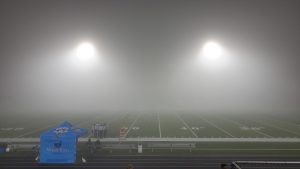 The scene Friday night on Rose Ridge prior to kickoff

Perhaps no one outside of the picturesque towns of Pound and Wise could have predicted the outcome of Friday night’s contest between the Ridgeview Wolfpack and the Wise Central Warriors.  In week three of the regular season, the Wolfpack had dispatched the Warriors with ease 41-20.  Trenton Adkins ran through the Central defense and made it look simple on his way to a six touchdown performance on that September evening.  The folks who made the trip from Wise County believed, and more importantly, coach Luke Owens and his young Warriors team believed and the Warriors shocked the Wolfpack 14-7 on a dense, foggy evening on the Ridge Friday night.

“Well you know my kids… I don’t think anyone gave us a chance of winning this football game tonight,” Owens said after the final horn had sounded.  “But, my kids believed it.  My coaches believed it.  Those people over there from Central believed it.  We came out and we played absolutely as hard as we could for 48 minutes and that was good enough to win the football game.”

The Warriors showed on their initial possession that this night would be different that that early season encounter.  Using up nearly half of the opening quarter, the Warriors ground and pound Wing-T came through with a big play.  In what appeared to be a design pass play, quarterback Ethan Mullins saw a hole in the middle of the Wolfpack front seven and ran.  55 yards later, Mullins found paydirt and the PAT made the score 7-0 in favor of the Warriors with 6:09 left in the first.

Owens talked about the play.  “At the time, we really didn’t realize how big a play it was.  Our defense, though was lights out.  But that play… that ended up being the big play of the first half.”

With the foggy conditions limiting the aerial attack, the Wolfpack had no other alternative but to stick with the ground game, which the Warrior defense did an exceptional job of containing.  Adkins was kept to a season low 117 yards with one touchdown on the night.

Owens complimented the star running back on the opposing sideline.  “Trenton Adkins is a heck of a football player.  He’s the best in the area and I thought we did the best job we could of bottling him up.”

The Warriors would add on to their lead at the 9:36 mark of the second quarter on a C. J. Crabtree three yard carry.  That score would prove to be the game winning score.

The Wolfpack’s only score of the contest came at the 7:48 mark of the third quarter, when Adkins reached the endzone from four yards out.  The game might have nearly been tied on the ensuing Warrior possession.  Dropping back to throw a short post pattern to Ben Brickey, Adkins seemingly came from nowhere through the shroud of fog to intercept the pass.  As Adkins raced down the home sideline seemingly on his way to paydirt, there was one Warrior defender to beat.  Adkins juked left, seemingly evading the lone Warrior, however the defender dived and made a shoestring tackle stopping Adkins at the 21 yard line.  The Wolfpack turned the ball over on downs at the seven yard line after the interception and would never threaten again.

“He (Adkins) baited us in there,” Owens said of the pick.  “Our guy was able to make a huge play down there and keep him out of the endzone.  That was the difference in the ballgame.”

Neither offense was able to sustain any long drive throughout the remainder of the contest.  The Wolfpack had one more chance late to tie or win the contest, but a Nick Phillips pass from the 35 yard line fell harmlessly incomplete to the Wolfpack stadium turf in the endzone as time expired.

The Wolfpack, for the second consecutive season, are eliminated in round two of the playoffs and left wondering what could have been.

The incredible unlikely season for Wise Central continues on to the Region 2D championship game, which will be played on Saturday in Bluefield, West Virginia against the Graham G-Men, who dispatched Union 48-7 last Friday.