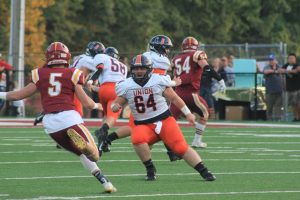 The two teams have grown to be pretty familiar with each other as they set to do battle in the playoffs for the fourth time in five years and for the fifth time overall. Back in mid September, Union traveled to Mitchell Stadium in Bluefield and stole one from the G-Men in the final seconds off of the right leg of Junior kicker Koby Crist. Union held a 27-10 lead in the third quarter of the game but allowed the G-Men to take a 35-34 lead in the final minute of the contest. A stellar drive from quarterback Brody Gibson who completed big passes to Daemi Lester, Mason Polier and Malachi Jenkins on the final drive with no timeouts set the Bears up to send Crist out for the decisive field goal to give Union a 37-35 win. 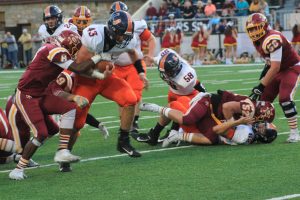 Fast forward to late November. Graham once again comes in to the game as the favorites to knock off the Bears and advance to their second consecutive Region 2D championship game. Graham is coming in to the contest as one of the hottest teams in the state. The G-Men are averaging 44 points a game and are only allowing 8 points per game to their opponents since the loss to Union in September. The closest contest Graham has had since the loss to the Bears is a 37-10 win over Richlands on October 25th. The G-Men have a plethora of playmakers across the board starting with quarterback Devin Lester. Lester, who has committed to play his college ball for the Monarchs of Old Dominion, threw for 328 yards against Union earlier in the season and accounted for 5 total touchdowns. Lesters favorite targets are Joey Dales and Xayvion Turner. Turner burned the Bears for 141 yards receiving and 3 touchdown grabs in the regular season matchup while Dales racked up 108 receiving yards in the loss. Isaiah Justice is also a target in the passing game along with Marqus Ray. Tre Booker is a playmaker out of the backfield and has some big bodies up front to pave the way for him. Sophomore Brody Meadows (6’7 280) is a mountain of a man at left tackle center Landon Atkins (6’0 210) is the anchor of the line. Peyton Kiser (6’1 220) and Connor Roberts (6’2 230) are physical at their guard positions. Aaron Edwards and Nick Kastner are tough in the middle of the defense at their linebacker spots. Issac Dalton has also made plays from his linebacker position this season for coach Tony Palmer. 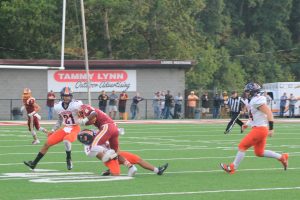 Daemi Lester pulls down Xayvion Turner of Graham while Malachi Jenkins (21) and Bryce Guerrant (24) close in to assist.

The Union Bears have been fine in the underdog role this season as they have embraced being doubted all season en route to a share of the Mountain 7 championship with Ridgeview. The Bears have struggled a bit down the stretch as they suffered two losses in early and middle October to Paintsville and Wise Central. Union has been bit by the injury bug this season as the biggest hit was losing tailback Zaiver Lomax to a season ending leg injury. Senior Bryce Guerrant has been banged up all season and has saw his carries become limited. Senior Mason Polier has led the offense this season with 1,580 yards rushing and has accounted for 30 touchdowns this season. Quarterback Brody Gibson has tossed 7 touchdowns this season but has only thrown 2 touchdowns since the matchup against Graham as both of those came in the win over Ridgeview on October 11th. Gibson is also capable with his legs as his 30 yard run last week against Gate City set up the game winning touchdown late in the fourth quarter. The Union offensive line has been a key to their offensive success as they have stuck to the run but are also battling through their late season nicks and bruises. The Bears have scored 27 points per game since the Graham game earlier in the season as they came in to that contest putting up nearly forty points per contest. The Union defense has been led by Polier and fellow linebacker C.J. Jones. The secondary has forced their share of turnovers via interception but have given up big plays through the air to Gate City and Abingdon over the last few weeks. Tanner Jervis, Gavin Perry and Jacona Hernandez have led the defensive front along with Trey Smith and Landon Parsons. Tadyn Roark and Koby Crist have split kicking duties for the Bears.

This will be the sixth meeting between the two schools and the fifth time they have met in the playoffs. The Bears have won every matchup with the only exception coming in this exact same game last season. Graham put Union away early for a 28-7 win en route to a Region 2D championship and also a state championship. It is sure to be another electric atmosphere inside Bullitt Park on Friday night as kickoff is set for 7 p.m. with the forecast calling for showers during the day but expected to tamper out through the evening as temperatures will be in the high 40’s around kickoff. The winner punches their ticket to the Region 2D championship game against the winner of Ridgeview and Wise Central which is being played Friday night at Ridgeview High School on Rose Ridge.