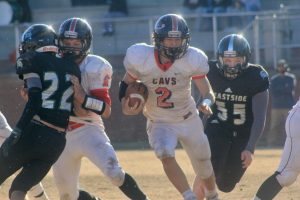 After making first round exits in the playoffs in 2011, 2012, 2013 and 2018, the Holston Cavaliers earned their first playoff victory since beating Bath County 30-7 in a 2013 playoff game in Damascus. Riding the arm and legs of quarterback Quaheim Brooks, Holston compiled nearly 400 yards of offense in the 29-15 victory over Eastside at Carl McConnell Stadium on Saturday afternoon.

“One thing we can always say about Q is that all these kids look up to him and feed off of his energy.” Said Holston head coach Derrick Patterson. “There is no doubt he’s a leader and he leads the right way and he’s one of our most competitive kids and today he was big when he needed to be.”

Holston drew first blood with only 48 seconds remaining in the opening quarter after 6’3 240 pound Austin Faris rumbled in to the end zone from 18 yards out. Eastsides Will Stansberry knocked away the two point conversion pass as Holston would hold a 6-0 lead going in to the second quarter. The Spartans would answer as they put together a 10 play 57 yard drive that was aided by a pair of Will Stansberry scrambled for gains of 16 and 17 yards. Garrett Whited capped off the drive with a 2 yard touchdown run with 8:34 remaining in the first half to give Eastside a 7-6 lead after the PAT from Tim Ely. Both defenses would stand pat throughout the half as Eastside wold take their lead in to the locker room at the half.

In the third quarter, Quaheim Brooks would give his team a lead they would not relinquish. After a personal foul on Eastside aided the Cavalier drive, Brooks was able to glide through the Spartan defense for a 28 yard touchdown run to put the Cavs up 14-7, a lead that would hold through the third quarter. On the second play of the fourth quarter, Austin Faris would score his second touchdown of the game, this time from 9 yards out to make the score 22-7 with 11:39 remaining in the game. A fumble would give the ball back to Holston on the ensuing kickoff. An eight play drive powered by the rushing attack of Faris and fellow tailback Jordan Ezzell allowed Brooks to plunge in the end zone from 1 yard out to make the score 29-7 with eight minutes remaining in the ball game. Eastside wouldn’t go quietly as Stansberry and Grayson Whited executed a screen pass that Whited took 80 yards to the house with 3:28 remaining. The two point conversion pass to Bryson Shepard was successful to make it a two possession game at 29-15. Eastside was able to force the Cavs in to a turnover on downs but fumbled the ball away with 1:40 remaining in the game and allowed Holston to bleed out the remaining clock to seal the victory and set up a rematch with the Patrick Henry Rebels. Holston fell to the Rebels 42-13 back on October 11th. 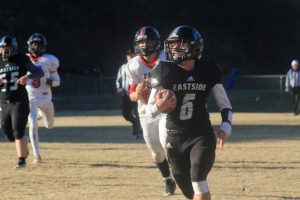 “Very familiar opponent.” Said Patterson when asked about his matchup with Mark Palmers Patrick Henry Rebels. “They’re 10-0 for a reason. Palmer does a great job. They’re athletic, very big and they don’t have a weakness. To give yourself a chance we have to play a perfect game and keep them from making big plays. Our kids are excited for the challenge and the opportunity, it’s going to be a fun atmosphere over at Emory and I get to go back and coach a game where I went to school so that’s going to be pretty cool but I’m just excited for the kids and the community to get this first playoff win in ten years.”

Eastside was held to 105 rushing yards but passed for 161 yards thanks in large part to the 80 yard touchdown reception from Grayson Whited. The Spartans committed five turnovers in the contest to go along with 6 penalties for 60 yards. Evan Bellamy recorded 15 tackles while Garrett Whited led the rushing attack with 70 yards rushing on 16 carries with a touchdown. Grayson Whited hauled in 5 receptions for 143 yards and a touchdown. Will Stansberry completed 7 passes for 161 yards. 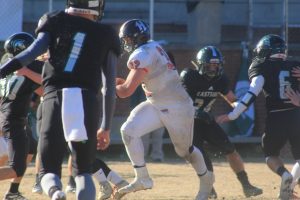 Austin Faris led the rushing attack for Holston with 126 yards on 20 carries and 2 touchdowns. Quaheim Brooks tallied 142 total yards on the day with 109 rushing yards and 2 touchdowns while passing for 33 yards. Jordan Ezzell racked up 83 yards rushing on 15 carries for the Cavs.

“Great play calls today and great execution up front by our line really allowed me to have the game I did today.” Said Brooks. “We know the challenge we are up against next week so we just have to show out and play our game. This team is special, we’re a brotherhood and we play together every game, it’s for each other every time we step on the field.”

Holston improves to 7-4 on the year and is prepped to take on the 11-0 Patrick Henry Rebels on Friday at Emory & Henry’s Fred Selfe Stadium. Kickoff is set for 7 p.m.