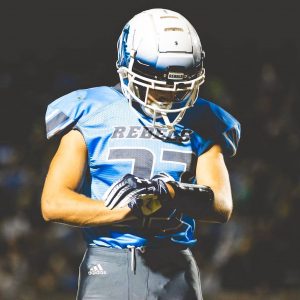 A first round matchup in Region 1D features a regular season rematch between two district champions.

The Black Diamond District champion Honaker Tigers are set to take on the Hogoheegee District Patrick Henry Rebels on the turf of Fred Selfe Stadium at NicewonderField on the campus of Emory and Henry College on Friday night.

Both teams come into this first round matchup after ending the regular season on two totally different notes.

Patrick Henry tailback Cody Smith pushed the Rebels past the Panthers with 184 rushing yards and three touchdowns. Connor Beeson also found the end zone on a night in which he rumbled for 83 yards.

The shutout capped off a regular season in which Patrick Henry only allowed its opponents an average of 10.7 points a contest.

A win over Honaker would tie a program high for wins in a season. The 1997 and 2018 versions of the Rebels each finished their campaigns with 11 wins.

Friday night marks the 11th time in program history that the Rebels have made the playoffs. The Rebels are one of 17 teams who finished the season perfect in the Commonwealth.

Patrick Henry’s opponent is no stranger to the playoffs.

The Honaker Tigers squeaked into the playoffs as the No. 8 seed after a 5-5 campaign.

Doug Hubbard’s squad finished the season on a sour note a week ago as Ridgeview torched the Tigers by a score of 61-14.

Honaker’s record setting tailback, Trevor Dye, ran for the Tigers only two scores to compliment his 141 yards on the ground.

Honaker has looked stellar at times this season, however, injuries have been a thorn in the Tigers paw at times.

Honaker has been triumphant against Lebanon, Twin Valley, Grundy, Hurley and Northwood in 2019 while faltering to Castlewood, Tazewell, J.I. Burton, Patrick Henry and Ridgeview.

In addition to Dye, Chandler Hubbard has been a strength for his father’s squad.

Doug Hubbard, in his 37th season as the head coach of his alma mater, would love to enter the playoffs and shake some things up.

Friday’s matchup will mark the 20th time that the Honaker Tigers have made it to the postseason. Hubbard has been at the helm for 18 of those post season runs—which include trips to the state championship contest in 2000 and 2012.

These two squads met up back on October 25th in Glade Spring when the Rebels trounced Honaker, 63-21.

The Rebels clicked on all cylinders that night on their home turf as they returned two kickoffs for touchdowns to go along with four rushing touchdowns.

Isaac Perkins had a rushing touchdown and another in the air for Honaker as the Tigers fell short on the road.

Friday’s matchup will be the 13th meeting all time between these to schools in a series that dates back to 1962. Honaker holds a 7-6 advantage in the series. Patrick Henry has come on strong as of late and has won the past four meetings between these two Region 1D powers.

Mark Palmer and Doug Hubbard have done battle eight times as head coaches. Hubbard currently holds a 5-4 edge over Palmer in a head-to-head matchup that goes back to Palmer’s tenure at St. Paul.