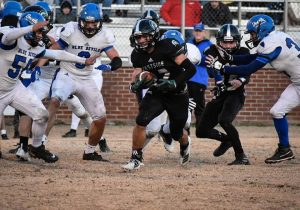 Much was riding on Saturday’s Cumberland District clash with Eastside and Castlewood:  a second place district finish and a home playoff opener.  It was the Spartans of Eastside that came out on top in the back and forth battle by a final of 42-32.

The win gives the Spartans a home playoff game in the opening round of the Class 1, Region D playoffs.  Eastside will host the Holston Cavaliers on Saturday, November 16 at 1:30 pm.  The Blue Devils must travel in the opening round to the Cumberland District champion John I. Burton Raiders.

The Spartans were given a shot in the arm before the contest when it was announced that Garrett Whited, who was injured in the benefit game against Honaker before the regular season began, would return for this pivotal contest.  Coach Mike Rhodes summarized what it meant to have Garrett Whited back.  “Unreal.  That opens everything up for us offensively and defensively,” said Rhodes.  “Not many kids can be out ten weeks and come back with 165 yards and two touchdowns and 15 tackles.”

Another key cog of the high powered Spartan offense was quarterback Will Stansberry.  Stansberry was a factor in five of the Spartan touchdowns with three through the air and two on the ground. 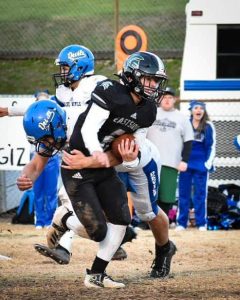 Will Stansberry attempts to break the tackle of a Castlewood defender (photo by R. J. Rose)

Stansberry opened the scoring on the chilly afternoon by scoring on a one yard sneak.  The Blue Devils answered back with a Collen Dudley three yard run.  Stansberry added his second rushing touchdown of the game with a nine yard carry to make the score 14-7 in favor of the Spartans after one.

Both teams continued to trade scores in the second quarter.  Castlewood received scores from M. J. Carter on a 72 yard run and Candler Dudley on a three yard run.  The Spartans answered with touchdown passes by Stansberry to Jesse Gibson for three yards and to Garrett Whited for 19 yards.  The Blue Devils failed on both PAT’s, however, and at the break Eastside held a 28-19 lead. 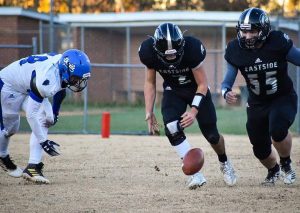 The third quarter belonged to Castlewood.  Jeremiah Allen scored on a 72 yard run.  On the ensuing possession, Stansberry coughed up the football and turned it over to the Blue Devils.  The Blue Devils took the lead for the first and only time of the contest on a 14 yard scoring strike from Collen Dudley to Jacob Vance with 1:43 left in the third.  Heading to the fourth, it appeared as if the Blue Devils were in control. 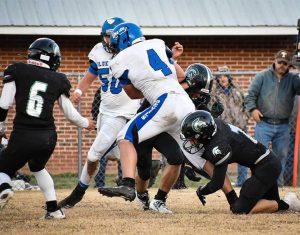 Jeremiah Allen of Castlewood looks to break the tackle of an Eastside defender (photo by R. J. Rose)

However, the Spartans answered back and assumed the lead for good with a six yard touchdown run by Stansberry.    Garrett Whited would put the dagger in the Blue Devil hearts and closed the scoring on a 36 yard run with a little over six minutes to play.

Leading the way for the Spartans on offense was Whited who had 165 total yards and two scores.  Stansberry also played exceptionally well compiling 98 yards and two scores throug the air and 46 yards and three scores on the ground.  The Blue Devils were led by Allen who finished with 195 yards rushing with the one touchdown. 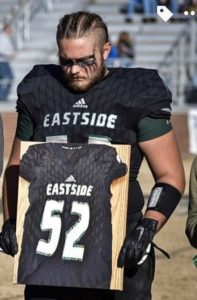 Also of note, Eastside senior Brayden Mullins has been selected to play in the Blue-Grey All American Bowl on January 13, 2020 in Atlanta, Georgia.