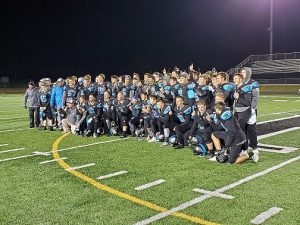 The Ridgeview Wolfpack football team had one thing on their minds on Friday night.  Defeat Honaker and clinch the top seed in the Class 2, Region D playoffs.  The outcome was never in doubt.

The Wolfpack scored early and often over the course of the game’s first half and demolished the Honaker Tigers 61-14.  Ridgeview scored on its first three offensive plays and their first nine possessions overall.

Trenton Adkins continued to add touchdowns and yardage to his already impressive resume.  Adkins scored on the first three times he touched the football from 22, 29 and 35 yards respectively.  Alijah Sproles scored on a five yard run and quarterback Cannon Hill, in relief of normal starter Nick Phillips, scored on a 16 yard run.  By the end of the opening frame, the outcome was already settled with the Wolfpack in control 34-0.

Adkins added his fourth touchdown of the evening on the Wolfpack’s first possession of the second quarter with a 20 yard run at the 9:43 mark.  The Tigers sustained a drive on the ensuing possession and Trevor Dye capped off the drive with a 21 yard scoring burst with 2:39 left in the half.  Hill would answer right back returning the ensuing kickoff back for 68 yards and his second score of the evening. The Wolfpack ended the half emphatically with Adkins’ fifth and final score of the night on an 11 yard carry.  At the break, the Wolfpack were in front 54-7.

With the outcome in hand, the Wolfpack backups were given time to shine in the second half.  Sophomore Michael Hammond took advantage of the opportunity scoring from one yard out with 4:32 left in the third quarter.

Honaker would close out the scoring with 6:57 remaining on Dye’s second touchdown of the night from seven yards out to provide the final margin of 61-14 in favor of the Pack. 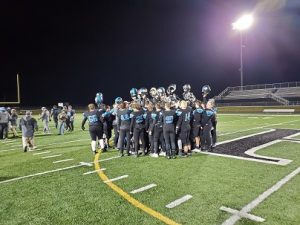 After the final horn sounded, the Wolfpack were presented with the Mountain 7 District championship trophy after securing a share of the title two weeks ago.  Ridgeview head coach Rick Mullins reflected on the regular season after the trophy presentation.  “These guys have worked really hard to get where they’re at.  I feel great for them, the school and the community,” said Mullins.

Mullins also clarified the injury situation with starting quarterback Nick Phillips moving forward.  “I think Nick will be back next week,” Mullins stated.  “He probably could have played tonight if we needed him to.  We held him out another week.  He should be full speed next week.”

Cannon Hill also took time to comment following the contest.  “I enjoyed it!  It was a fun game.  A big win after a loss last week and we felt we had to prove something.”  Hill has raised eyebrows with his punishing defense this season for the Pack.  “I love flying to the football!  I love defense!  It’s the name of the game really.”

Leading the way for the Pack was Adkins, who had nine carries for 173 yards and five touchdowns.  The Wolfpack defense was outstanding on the night as Caden Gibson and Shane Deel had fumble recoveries.  Josh Boyd blocked a punt for the Wolfpack and Chase Salyers recorded one sack.

For the Tigers, Trevor Dye had a fantastic evening with 141 yards on 22 carries and two touchdowns.

With the regular season in the rear view mirror, both teams now turn their attention to the VHSL playoffs.  Ridgeview is the number one seed in Class 2, Region D and will host the Marion Scarlet Hurricanes on November 15 at 7 pm.  Honaker will be the eight seed in Class 1, Region D and travel to face the Patrick Henry Rebels.  That game will be played at Emory and Henry College and is also scheduled for a 7 pm kickoff on November 15.