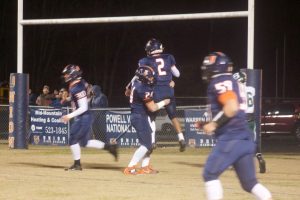 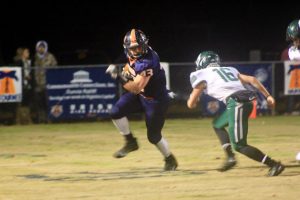 In the movie The Program, Joe Kane said it best “Let’s put the women and children to bed and go looking for dinner.” Well, it didn’t take long for the Bears to get everybody tucked in and get themselves fed. Union used a 20 point first quarter to put away the John Battle Trojans in a 54-7 win that gave Union a share of the Mountain 7 title along with Ridgeview.

“We came out right off the bat and the offensive line took control.” Stated Union head coach Travis Turner. “We hit some big plays early with Mason and that gave us the momentum and we kept it. I think we got to play all 60 some kids on the roster and we had some young kids come in during the second half and make some plays for us.”

Union struck first less than a minute in to the ball game when senior defensive back Daemi Lester stepped in front of a Battle pass and coasted in to the end zone for a 20 yard pick six to give the Bears a 7-0 lead with 11:10 showing on the clock. Union would quickly pile up the points as Mason Polier took a handoff 44 yards to the house to add to the lead. The PAT hit off the upright and Union led 13-0. After a one handed interception from defensive back Alex Rasnick, who had to tip toe on the sidelines to stay in bounds, Polier would rumble 77 yards to the end zone two plays later to give the Bears a 20-0 lead after the end of the first quarter.

On the opening play of the second quarter Polier added his third score of the night on a 35 yard touchdown run to make the score 27-0 with 11:52 remaining in the first half. John Battle finally got the board with 8 minutes left in the second quarter as Shannon Wohlford waltzed in to the end zone from 7 yards out to make the score 27-7. Union would then put a good 7 play drive together that was capped off by a 1 yard touchdown plunge from Bryce Guerrant with 3:27 remaining in the opening half to make the score 34-7 and stand until halftime. 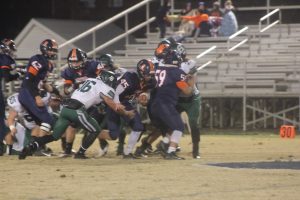 Freshman Jesse Horton (45) bulldozes his was through Trojan defenders

Malachi Jenkins returned the opening second half kickoff 23 yards out to the Union 24 yard line to set up shop for the Bears. After chunk runs from C.J. Jones and Jesse Horton, Jones rumbled in to the end zone from 52 yards out for his first touchdown of the season to give Union a 41-7 lead. After forcing Battle to go three and out, freshman Peyton Honeycutt darted 75 yards to the end zone on the first snap of the drive. The PAT was no good and Union led 47-7 4:44 left in the third. Later in the fourth quarter, Union added the finishing touches as Tadyn Roark stepped in front of a John Battle pass and raced 35 yards to the end zone for the Bears second pick six of the game. The interception return would close out scoring as Union would go on to win the game 54-7.

John Battle finished the season at 2-8 overall and outside of the playoff picture. Union closed out regular season play 8-2 and co champs of the Mountain 7. Union will host Gate City in the first round of the playoffs on Friday at 7 p.m. inside Bullitt Park. The Bears defeated the Blue Devils 28-14 back on September 27th. 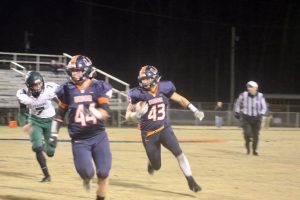 Union was led on the ground by Mason Polier would tallied 216 yards rushing and 3 touchdowns on only 9 carries.

“Mason is a special kid and he’s got a chance to play a lot of football in his lifetime. He’s a hard worked and has all the tools to play at the next level on Saturdays.” added Turner.