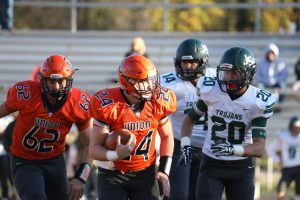 With one week remaining in the regular season the Region 2D playoff picture is pretty clear. With the John Battle Trojans on the outside looking in, a big win for them at Bullitt Park against the Union Bears could catapult them in to the picture. This will be the seventh meeting between the two schools as they met twice on the gridiron last fall, once in the regular season and then a week later in the opening round of the playoffs both of which were shutout victories for the Bears. 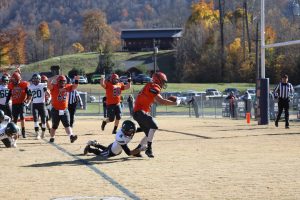 Mason Polier drags a John Battle defender in to the end zone in last years playoff game at Bullitt Park. Polier rushed for 2 scores in the 21-0 win

John Battle is coming off of an impressive 41-7 throttling of Lee High last week in which Jack Thurston went 10-13 through the air, passing for nearly 200 yards and 3 touchdowns to three different receivers. Seth Scarbrough and Shannon Wohlford are pounding out the yards in the backfield for the Trojans who have been hit hard by the injury bug this season seeing as they have lost three players for the year, senior running back Dylan Cunningham being the major blow for Battle. The Trojans could be gunning for a fifth win but instead are searching for number three on the year. The Trojans have beaten Virginia High and Lee while losing to Holston and Marion by a combined 7 points. Battle also put up 34 points against a tough Wise Central team back in mid October. A smothering defense last week against Lee saw the Generals only muster 130 yards of offense against Battle. The boys from Exit 7 are only bringing a 2-7 record to Bullitt Park but expect the Trojans to be prepared for war Friday night.

Union, needed two overtimes last Friday night to stave off a stingy Abingdon team. Union rode their workhorse fullback Mason Polier and got a big touchdown pass from Daemi Lester to Malachi Jenkins in the first overtime to propel them to a 28-21 victory. In danger of losing their second game in a row and third out of their last four games, coach Turner pulled one out of his sleeve with the reverse pass from Lester to Jenkins to shift momentum after the first overtime. Polier scored the go ahead touchdown and Ethan Hall and C.J. Jones sacked the Abingdon quarterback on fourth down to seal the win and keep Unions hopes of a shared Mountain 7 title alive. Polier upped his season rushing total to 1,364 yards and has now ran for 23 scores. Polier added 11 tackles and an interception on defense. Quarterback Brody Gibson has now thrown for 770 yards this season with 7 touchdowns. Unions defense allowed 180 rushing yards to Abingdon last week and the Falcons threw for 107 yards. Unions defense is now giving up 225 yards on the ground over their last two games after they held Ridgeviews rushing attack to 160 yards on the ground three games ago. Look for the Bears defense to come out with a chip on their shoulder as they try to limit the offensive abilities of John Battle. The offensive unit will sure be challenged against an aggressive and rugged Trojan defense. 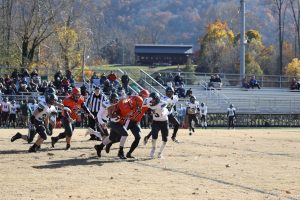 Union has dominated this series that dates back to 2013. Union has averaged 36 points per game when matched up against Battle while the Union defense has halted the Trojan offense to 12 points per game in the series. A win for Union clinches at least a share of the Mountain 7 championship while a John Battle victory gives Ridgeview the outright title and perhaps places the Trojans in to the playoffs. This will be more than just a 7-2 team hosting a 2-7 team, a lot will be on the line Friday night at Bullitt Park. It will be a cold one as early forecasts show it will be a frosty 27 degrees at kickoff.