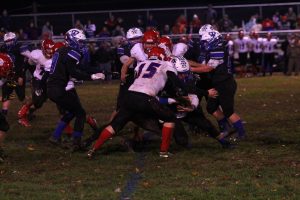 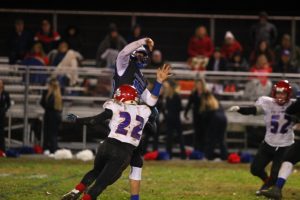 Coach Keith Warners Titans have kept their playoff hopes alive. Needing to win their final two games against Thomas Walker and Rye Cove, the Titans took their first step this past Friday night as they went on the road and upended the highly favored Pioneers, 35-13.

Coach Nick Johnsons Pioneers have now lost two in a row after a 6-1 start to their season. Coming off of a 37-12 loss to Eastside last week, Thomas Walker was still in position to be hosting a playoff game but those hopes are now dwindling away after a loss to Twin Springs and a matchup with 7-2 J.I. Burton looming this coming Friday. 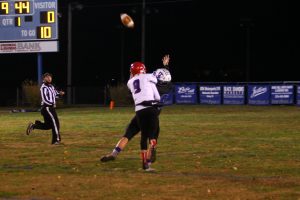 Thomas Walker struck first in the opening quarter behind Kenny Balls 11 yard touchdown run. Twin Springs would quickly answer behind Corbin Kilgores 22 yard scoring jaunt. Kilgore would add the two point conversion and the Titans would take an 8-7 lead that wouldn’t be surrendered. The Titans would extend their lead to 14-7 at the half behind a 22 yard touchdown pass from Sophomore quarterback Mason Elliott to Senior wideout Christian Hinkle. Elliott wasn’t finished through the air as he connected with fullback Connor Gilmer in the third quarter on a 12 yard scoring strike to push the Titan lead to 20-7 going in to the fourth quarter. Kilgore would put the final nails in the coffin as he scored on runs of 39 and 57 yards in the fourth to put the Titans up 35-7. Ball would add a late touchdown for the Pioneers to make the final score 35-13. 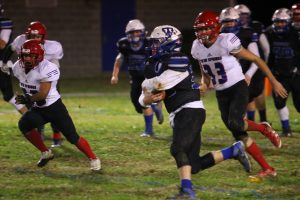 Twin Springs (5-4, 1-3) was led by Senior tailback Corbin Kilgore who toted the rock 23 times for 197 yards and 3 touchdowns. Kilgore also surpassed the 1,000 yard mark for the season in the victory. Preston Larkins added 8 carries for 55 yards for the Titans. Quarterback Mason Elliott only threw two passes in the game but completed both for touchdowns and a total of 34 yards. Christian Hinkle and Kyler Ford each recorded interceptions for the Titan defense. Kenny Ball led Thomas Walker (6-3, 2-2) with 96 yards rushing on 20 carries and added both of his teams touchdowns. Thomas Walker was outgained 288-143 by the Titan offense. 105 yards in penalties and 4 turnovers by the Pioneers also hampered them during Friday nights contest.