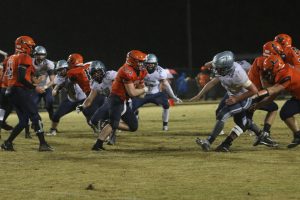 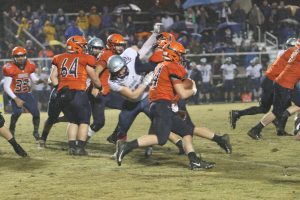 The Union football team is coming off of a much needed bye week after suffering a 21-13 setback to the Wise Central Warriors on October 18th at Tommy McAmis Field in Norton. Abingdon suffered a double blow last week as they lost star Junior tailback Martin Lucas during the week to a season ending foot injury then suffered a 41-0 loss to the Ridgeview Wolfpack on Friday night in Dickenson County. The win by the Wolfpack guaranteed them a share of the Mountain 7 crown while the winner of the Union and Abingdon contest remains in line to also clinch a share of the title.

Union (6-2, 3-1) has been bit by the injury bug over the last few weeks but the Bears have plenty of pieces to fill in when and if they are needed. Mason Polier has been an absolute workhouse for the Bears as he eclipsed the 1,000 yard mark in rushing in the loss to Central. Polier has rushed for 1,137 yards and 20 touchdowns this season. Senior tailback Bryce Guerrant continues to show his toughness every night as he is battling through lingering injuries. C.J. Jones has taken advantage of reps in the backfield and has done a tremendous job blocking out of the backfield. Junior quarterback Brody Gibson has thrown for 750 yards on the year while tossing 7 touchdowns. Gibson has plenty of options in the passing game with brothers Antwun and Malachi Jenkins, Daemi Lester, Alex Rasnick and Tadyn Roark, who is coming off of a 50 yard receiving effort in the loss to Central. Antwun Jenkins has had a tremendous year on both sides of the ball for the Bears as he excels in both the passing and running games. Jenkins is also a ballhawk on defense along with the likes of Rasnick, Lester and Malachi Jenkins, who also has a number of interceptions. The defensive unit for Union struggled getting off of the field in their last outing as they allowed a number of chunk yardage plays. Look for the Bears to play with much more passion this Friday night in what is a huge game for both teams.

Abingdon (4-4, 3-1) struggled to move the football in last weeks loss to Ridgeview as Malique Hounshell has been asked to fill in for the injured Martin Lucas. Hounshell finished with 65 yards on 10 carries as the Falcons took to the air last week. Quarterback Jadon Boothe had a long night last Friday as he was sacked 7 times by the Ridgeview defense. Boothe did throw for 171 yards on 17-35 passing with 2 interceptions. Boothe has plenty of options throwing the ball as he looks to Peyton McClanahan and River Carter in crucial downs. Carter is heavily involved in the offense as he has logged carries on the jet sweep and has also thrown a few passes during the season. On defense the Falcons have a hard nosed middle linebacker in Eli Ratcliff and a stout defensive end in Dylan Hale. Timmy Jessee is a proven cornerback and isn’t afraid to make tackles on the perimeter. Look for Abingdon to come out and try to make a statement against the Bears on Senior night.

Both teams have played tough schedules as Abingdon has played the likes of Richlands, Pulaski and Tennessee High while Union has logged tough games against Richlands, Graham and Paintsville. This will be the third meeting between the two teams as Union clipped the Falcons in 2017 by a score of 35-7 while Abingdon won last years contest at Bullitt Park by a score of 35-17. It will be a chilly night Friday Night at Falcon Stadium as the early forecast is showing that it will be 39 degrees when the two teams kick off at 7 p.m.