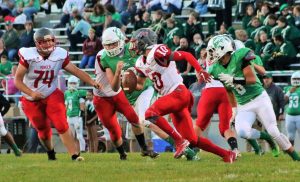 After back-to-back thrillers on the road, the Hurley Rebels return home to The Cliff on Friday to host the Auburn Eagles.

The Rebels fell on the road in Damascus last week to the Holston Cavaliers by a score of 28-22. Holston scored the game-winning touchdown with under a minute to play on a 14-yard pass from Quaheim Brooks to Logan Walden.

Austin Cooper looks to steer his squad away from what would be its third straight loss.

Cam Akers is in his fourth season at the helm the quad from Riner. His Auburn Eagles are 4-5 on the seasons with wins over Craig County, Floyd County, Eastern Montgomery and Grayson County. Narrows, George Wythe, Fort Chiswell, North Cross and Galax have handed the Eagles their give losses of the season.

Much like the Rebels, Auburn looks to avoid its third consecutive loss to round out regular season play on the road.

Malachi Spencer leads the Eagles offense. In last week’s 55-14 loss to Galax, Spencer had 27 rushing yards and two touchdowns for Auburn. The Eagles offense accumulated 233 yards of total offense, 230 of which were racked up on the ground.

Friday’s matchup at Smiley Ratliff Field will be the first time these two schools have ever met on the gridiron.