The Spartans jumped out to a 21-0 lead over the Mountaineers in the first quarter. Tailback Dominic Collini scored the first points on the night on the opening drive from three yards out. Collini finished with eight carries for 78 yards and two touchdowns. Giles found paydirt again on the second possession when Greenway plunged in from two yards out. The Spartans finished out the quarter with their first special teams touchdown of the season when Collini returned a punt for 34 yards. 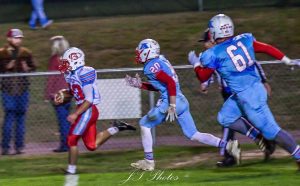 The second quarter was much like the first. Alleghany struggled to make it into Spartan territory. Giles added two more scores from Collini and fullback Chaston Ratcliffe who finished with 67 yards on 13 carries. Spartans led 35-0 at the break. 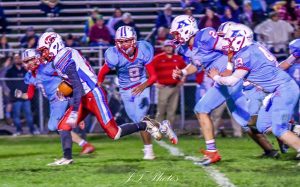 Logan Greenway takes the reverse for 73 yards. He finished the night with 137 yards and two scores. (photo by John Turner)

The second half continued to be all Giles. Greenway added his second score after he broke loose for 73 yards on a reverse. On the following Mountaineer possession, defensive lineman Joey Williams scooped up a fumble and returned it for 16 yards which was indeed the play of the game judging by the crowd reaction. Tre Slusser added the last score of the night from 40 yards out on the reverse.

The Spartans will now turn their attention to this Friday as they host their district foe Glenvar (4-4, 3-1) on Homecoming night. The Highlanders are coming off of a 13-7 heart break to Radford which gave the Bobcats control of the Three Rivers District. Glenvar is lead by senior running back Brady Loader, who is in fact a load to bring down. Loader did not see much action against Radford as he went out in the first half with a knee injury. Head Coach Kevin Clifford stated that he was not sure of the extent of the injury, but that it did not appear serious.

As the last few weeks of the regular season are winding down, each win is critical for playoff implications. Glenvar currently resides as the fifth seed in 2C and must win out to have a chance at securing a top four spot and a home playoff game.

For Giles, the playoffs aren’t looking promising as they are currently sit in the 12th spot in 2C. The Spartans are in jeopardy of missing out on the playoffs for the second time since 2003. With a win over Glenvar and James River, the Spartans have a good shot at making the top eight. Losing to Glenvar on Friday may shatter their hopes of making it to the post season.