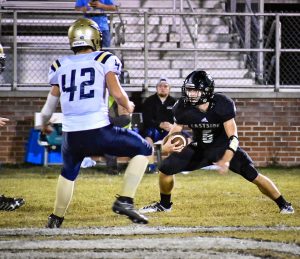 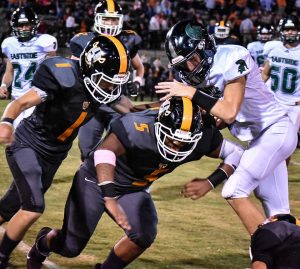 Both Rye Cove (4-4, 0-3) and J.I. Burton (6-2, 3-0) come in to this Fridays contest at the Eagles Nest riding winning streaks. Rye Cove has won two in a row while averaging 40 points per over the two wins. Burton is perhaps one of the hottest teams in Southwest Virginia as they have reeled off six consecutive victories, including a 28-7 victory over a pesky Castlewood squad last Friday night inside Lawson Fitchko Stadium.

Friday nights contest will feature two of the hardest runners in the region with Burtons Mikey Culbertson and Rye Coves Mason Hardin. Culbertson is this weeks News 5 player of the week after his performance against Castlewood in which he tallied 18 carries for 134 and scored all 4 of his teams touchdowns. Culberston has rushed for 596 yards this year with 14 touchdowns. Culbertson has also registered 90 tackles and 4 interceptions on defense. Hardin has accounted for almost 500 yards rushing over the last two games. He has rushed for 7 touchdowns while throwing for 2 touchdowns over the two game span as well. The Junior has rushed for 852 yards on the year with 12 rushing touchdowns. He has also passed for 236 yards on the year. 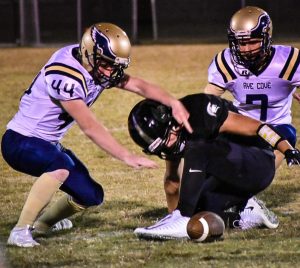 Rye Cove has had other playmakers step up for them over the past few games. Tyler Darnell has put up good numbers running the football while Andrew Jessee has proven to be a viable target in the passing game. Matthew Hardin and Jesse Barnette have contributed on the offensive side of the ball as well for Cheyenne Osbornes Eagles. Darnell leads the team in receiving with 144 yards and 4 touchdowns while Ashton Starnes and Senior Matthew Hardin lead the defensive unit. Starnes has recorded 45 tackles on the year while Hardin has 30 tackles with 7 of those coming for loss.

J.I. Burton has a plethora of ways they can beat you. Culbertson leads the rushing attack while quarterback Jaymen Buchanan will beat you with his arms and his legs. Najee Steele and Esau Teasley are each a threat to go the distance when they get the ball in their hands. Teasley is the Raiders leading rusher with 678 yards while scoring 11 touchdowns. Steele has rushed for 444 yards with 11 touchdowns. Quarterback Jaymen Buchanan has thrown for nearly 700 yards on the season with 5 touchdowns while rushing for over 200 more. Buchanan has thrown touchdown tosses to four different receivers as Freshman Tre Keys leads the team with 2 touchdown receptions. Elijah Lovell has also been a viable target to his quarterback this season while Teasley and Steele are also two of the teams leading receivers. On defense for the Raiders Xadrian Tayborn has registered 50 tackles and leads the team with 3 sacks. Kaleb Mink and Lonnie Lindsey also check in as two of leading tacklers for the defensive unit. Tyrell Ingram has nabbed 3 interceptions while Najee Steele and Tre Keys have registered 2 picks a piece. 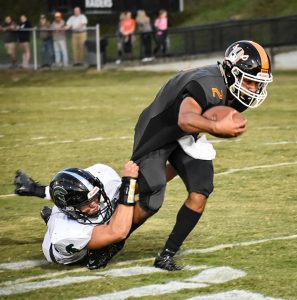 Since joining the Cumberland in 2013, the Raiders have dominated the series against Rye Cove as they are a perfect 6-0 against the Eagles and have outscored them 289-41 since becoming Cumberland foes. Kickoff for Friday nights contest is scheduled for 7 p.m. inside The Eagles Nest at Rye Cove High School.