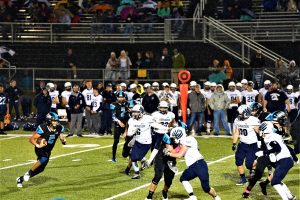 Coming into Friday night’s Mountain 7 District showdown with the Abingdon Falcons, most Ridgeview fans, players and staff were expecting a tough battle.  It was anything but.  The Wolfpack offense eclipsed the 40 point plateau once again and the defense scored its first shutout of the season as the Wolfpack controlled from start to finish in a resounding 41-0 victory.  The victory over the Falcons assures the Wolfpack of no worse than a share of the Mountain 7 District title.  Ridgeview has all but clinched the top seed in the upcoming Region 2D playoffs as well.  Unless the Wolfpack lose both of their final two games, Ridgeview will be the top seed when the playoffs begin on the third weekend in November.

The recurring theme for the Wolfpack offense is the play of junior running back Trenton Adkins.  Adkins, once again, had an outstanding game amassing 29 carries for 243 yards and five touchdowns.  Adkins also had an amazing interception on defense, practically stealing the pigskin from an Abingdon receiver’s hands.

The key Mountain 7 District contest was played in a steady drizzle, and for awhile at least, it appeared both offenses would struggle to find the endzone on the night.  The Wolfpack and Adkins finally broke through with 2:18 left in the opening quarter with a 10 yard run.  Landon Knepp’s extra point was true and the Wolfpack led 7-0 after the opening frame.

Adkins added two more scores in the second period from 12 and 29 yards respectively.  The Falcons managed to put together a sustained drive to close the first half, however, Nick Phillips intercepted a Jadon Boothe pass in the endzone on the half’s final play.  At the half, the Wolfpack led the contest 21-0.

After the teams emerged from the locker room to begin the second half, it didn’t take long for Adkins to strike again.  Covering 69 yards in two plays, Adkins scored his fourth of the evening from 18 yards away.  Ten minutes later, Adkins scored his fifth and final tally of the night from one yard out.  After three quarters, the Pack had a 34-0 advantage. 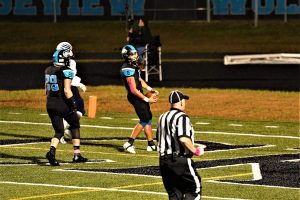 Trenton Adkins scores a touchdown on Friday night against the Abingdon Falcons. (photo by Crystal Kilgore)

Alijah Sproles closed out the scoring for the evening for the Pack with 5:19 remaining on a one yard plunge of his own to provide the final 41-0 margin.  The Wolfpack shutout is only the fourth in team history and first since a 54-0 drubbing of Wise Central in 2018.

The district title for Ridgeview is the first in the history of the young fifth year program.  Coach Rick Mullins reflected on the accomplishment after the contest.  “We made history.  I told them we have to start with one.  This is the first one.”  Mullins was also quick to praise the effort of his team.  “I thought we executed really well tonight,” said Mullins.  “We worked really hard all week.  The pass defense has kind of been a weak link of ours.  We still gave up some yards tonight, but the defense did an outstanding job of coming up and making tackles and took away the long ball and that was the difference.”

Coach Garrett Amburgey of the Falcons was quick to credit the work of the Wolfpack defense as well.  “Yeah, they played really well defensively.  That’s a credit to them.  They played physical and tackled really well.  They’re a good football team.”  The Falcons can still claim a share of the Mountain 7 District title with victories over Union and Lee the final two weeks of the regular season, a fact not lost on Amburgey’s mind.  “I told my team, ‘This is life,'” Amburgey said.  “You have to attack it head on, go to work on Monday and attack those things head on and practice hard.”

Abingdon will try to regroup next Friday when they host Union in a game which will most likely decide who will share the district crown with the Wolfpack.  Ridgeview has a tough challenge the same night with current number one ranked Class 1A Pikeville, Kentucky in the Bluegrass state.