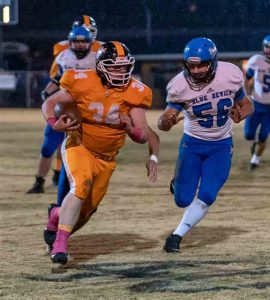 J.I. Burton extended their winning streak to six games while taking over sole possession of first place in the Cumberland after their 28-7 victory over Castlewood Friday night. The loss snapped a four game winning streak for Castlewood and handed the Blue Devils their second Cumberland loss of the season. 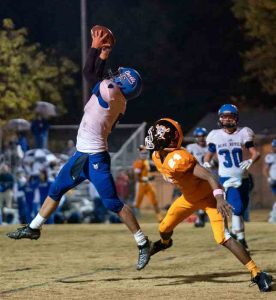 The Raiders got all they wanted from Castlewood in the first half while only leading 6-0 in the second quarter. The Blue Devils finally found some traction in the running game and put together a scoring drive. Jeremiah Allens 3 yard touchdown run midway through the second quarter put Castlewood ahead 7-6 at halftime. Then the third quarter rolled around and Mikey Culbertson happened. Culbertson scored all four of his teams touchdowns with two of those coming in the third quarter on runs of 50 and 12 yards to give the Raiders a lead they wouldn’t relinquish. Culbertson also added a 6 yard run in the fourth for good measure to put the Raiders up 28-7 and close scoring. Culbertson toted the rock 18 times and rumbled for 134 yards and 4 touchdowns while catching a pass for 13 yards. He also converted 3 two point conversions on the night for the Raiders. Castlewood got 92 yards and a touchdown on 21 carries from Jeremiah Allen. Quarterback Jaymen Buchanan picked up 90 yards on 8 carries as Burton rolled out 283 rushing yards as a team. Najee Steele contributed 60 yards on 10 carries for the Raiders. Castlewood, who didn’t get much outside of Allen, ran for 144 yards as a team and also turned the ball over three times on the night. The Blue Devils were also 2-12 on third downs while the Raiders converted 4-9 on third downs.