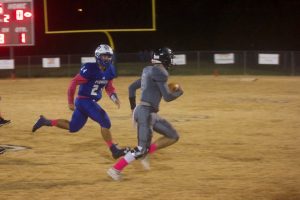 Coming in to Friday nights contest, much of the talk was about the matchup between the hard hitting linebacker Evan Bellamy from Eastside and the bruising running back from Thomas Walker, Kenny Ball. Both players put up great numbers as Ball rushed for 104 yards and a touchdown while Bellamy collected 11 tackles. However, Grayson Whited stole the show. Whited ran for 197 yards and 3 touchdowns to push his Spartans to their biggest win of the season, a 37-12 triumph over the visiting Pioneers. The win put the Spartans in the thick of things in the Region 1D playoff picture while the Pioneers dropped down a few spots in the standings.

“It’s a huge win for us, not only in the Cumberland but for power points.” Said a jubilant Mike Rhodes. “That’s a 6-1 football team, a heck of a football team. I’m proud of the kids tonight, they responded well, came to play and beat a good football team. The Ball kid is a heck of a player, our goal was to key on him and try to shut him down a little bit but he hit a couple big plays on us but that’s just who he is. I thought we contained him pretty well and make some plays offensively and eat the clock.”

“They whooped us up front.” Said Thomas Walker head coach Nick Johnson. “We just couldn’t get any continuity, any rhythm going and they took advantage of it, their defense is not near as bad as some of their scores have indicated. Rhodes is a great coach and he’s done a great job with them and they’re peaking at the right time.”

In a steady drizzle at Carl McConnell field, both teams went back and forth in the first quarter as neither team was able to put a drive together. Eastside looked to score midway through the first after Jordan Gray made a diving interception off of Thomas Walkers Zach Kidwell at midfield. The pioneer defense was up to the challenge and forced the Spartans to punt. After the Pioneer drive stalled, Eastside was able to find some ground in the running game and put a drive together. On the first play of the second quarter Nick Raymond drove his way in to the end zone from two yards out to make the score 7-0. Thomas Walker would respond as a 42 yard run from Ball placed the Pioneers inside the Spartans 10 yard line down to the 8. It would take the Pioneers four plays to find the end zone but Ball bowled his way in from two yards out to put the Pioneers on the board. The PAT was no good and the scoreboard favored the Spartans 7-6 with 9:19 remaining in the first half.

With 6:37 remaining in the half and Eastside driving, the Thomas Walker defense made a play. A fumble recovery from the Pioneers took the ball away from Eastside at the Pioneers 16 yard line. However, Thomas Walker wasn’t able to find any traction and gave the ball right back to the Spartans. A big blow would come for the Pioneers as Jaron Warf would be ejected on the next Spartan drive and leave a hole in the middle of the defensive unit. Eastside would take advantage as Whited broke loose on a 4th & 4 to scamper 40 yards for a touchdown with 3:01 left in the opening half. Hill split the uprights on the PAT to make the score 14-6. Eastside wasn’t finished as they were able to get the ball back before the half. Quarterback Will Stansberry found Ethan Hill for a 22 yard touchdown pass right before the half and the Spartans took a 21-6 lead in to the half. 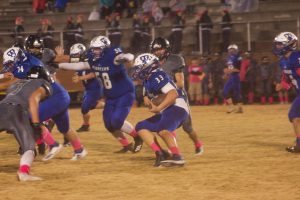 The second half started with a bang as Whited tallied his second touchdown of the night. A 52 yard run on the Spartans first play from scrimmage to make the score 28-6 with 11:48 showing on the board. Thomas Walker showed no signs of quitting as they marched down the field and cut in to the Eastside lead. On 4th &16 quarterback Zach Kidwell found receiver Logan Ely, who went up and in double coverage and made a tough catch for a 20 yard touchdown pass. The two point conversion failed to make the score 28-12 with 6:42 remaining in the third quarter. Thomas Walker continued to have trouble getting off of the field on defense as Whited cut through the defense for his third and final touchdown of the night, this time on a 17 yard run with 23 seconds remaining in the third quarter to make it a 35-12 ballgame heading in to the final period. Thomas Walker wasn’t able to muster anything else on the stout Spartan defense as they stopped the Pioneers in the end zone for a safety for their final points of the game to make it 37-12. 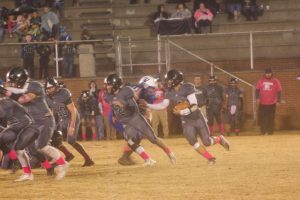 Eastside rushed for 310 yards and passed for 47 more while holding the Thomas Walker rushing attack to 87 yards. Each team only turned the ball over once as Eastsides defense came away with an interception and the Pioneer defensive unit came away with a fumble recovery. Thomas Walker was penalized 11 times in the contest for 75 yards while Eastside would only be whistled 5 times for 40 yards. The win for Eastside evens their record at 4-4 overall and makes their record 3-1 inside the Cumberland. Thomas Walker falls to 6-2 overall and 2-1 inside the Cumberland.

Eastside is set to host to host the Holston Cavaliers (5-3) this coming Friday at Carl McConnell stadium while Thomas Walker hosts Twin Springs (4-4) in another big Cumberland game for both teams.

“We’ve got some things we’ve got to get cleaned up this week, some injuries and other things because we’ve got another big game coming up this week. Twin Springs has athletes, they run the ball hard and they are much improved. Coach Warner does a great job with them, they get after it. They’re fighting for their playoff lives as well so we’ve just got to be competitive and get some things fixed between now and then.”  Added Johnson.