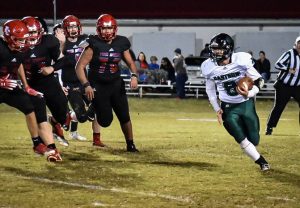 With three weeks to go in the regular season the Cumberland race is just heating up. Thomas Walker (6-1, 2-0) currently sits in first place with Burton (5-2, 2-0), Castlewood (5-2, 2-1) and Eastside (3-4, 2-1) all breathing down their throats. Eastside has played one of the toughest schedules in 1D but have won three out of their last four to put themselves in the thick of things in the Cumberland. Thomas Walker is off to one of their best starts in school history and have a bruising running back in Kenny Ball who is closing in on 1,000 yards rushing on the season. Ball, who is a touchdown machine, scored four touchdowns last Friday against Twin Valley and currently sits with 901 yards rushing on the year to go along with 13 touchdowns. Eastside has a counter on the defensive side of the ball in linebacker Evan Bellamy who set a single game school record in tackles against Rye Cove two weeks ago. Bellamy against Ball will be a key matchup to keep an eye on.

“Bellamy is probably the best linebacker I have ever watched.” Said Thomas Walker head coach Nick Johnson. “He’s explosive, he reads well and he has no hesitation.”

“Kenny Ball is just a kid that everybody would want on their team.” Stated Eastside head coach Mike Rhodes. “He plays the game the right way, plays to the whistle and we’re going to have to get plenty of hats to the football because he’s very hard to get to the ground one on one.”

“I’ve been blessed.” Added Johnson. “When i took over we had five losing seasons in a row. We’ve had a great group of kids who don’t want to be just that team that has success in the regular season and exits early from the playoffs. They understand that we have a target on our backs and that they have to prepare twice as hard. We want to build off of our regular season and turn that in to a deep run in the playoffs.”

This will be the ninth matchup between the two schools as Eastside holds the 7-1 advantage. Thomas Walker won the first ever meeting between the schools in 2011, 30-7, but the Spartans have since won seven in a row over the Pioneers. Eastsides 35-28 win last year was the closest margin between the schools since a 55-34 Eastside win in 2015. 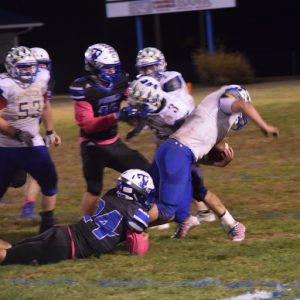 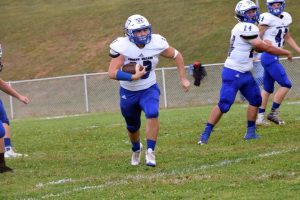 A victory for Eastside could platoon them into the top 8 in the playoff standings and keep them in the race for a Cumberland crown. Thomas Walker currently holds the number 2 seed in the Region 1D playoff standings and a win over the Spartans would set them up nicely as far as winning the Cumberland with home games remaining against Twin Springs at home and a huge game in week 11 against J.I. Burton in Ewing.

Kickoff this Friday is set for 7 p.m. at Carl McConnell stadium in Coeburn.