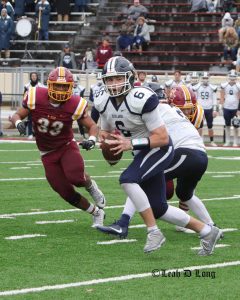 It was dubbed the Battle of the Storms, but it wasn’t much of a battle as Richlands cruises to a 38-0 victory over Marion.

The Blues defense held Marion to just 65 yards of offense, forcing two fumbles and not allowing a Marion first down until well into the second half.

Hayden Whited also blocked a punt in the rout.

And now all eyes turn to county rival and defending state champion Graham.

The G-Men will come to Ernie Hicks Stadium after a big homecoming win over Virginia High.

Expect a capacity crowd in what will be the de facto Southwest District championship matchup. A home playoff game may also be on the line Friday night.

Richlands will look to keep the ground attack running strong against a stout Graham defense. Graham has the team speed advantage, and will try to flaunt that on the turf.

Look for this one to come down to who makes the least mistakes in a heated rivalry.

Kickoff is set for 7pm on Friday night.