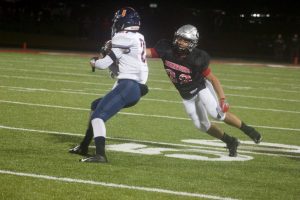 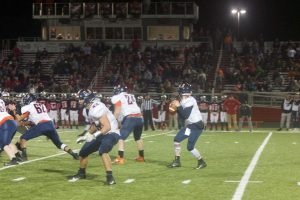 After their big win over Ridgeview, the Union Bears were blindsided by the Wise Central Warriors last Friday night on the road in Norton. In upset fashion, the Warriors ran past the Bears 21-13.

“We didn’t play well, we shot ourselves in the foot.” Stated Union head coach Travis Turner. “Give them credit, they played extremely hard and we didn’t do a very good job coaching.”

A lackluster start from the Bears suggested that an upset was looming. A three and out on their opening drive that saw them only go backwards and a fumble on their second play of their second drive gave Central immediate momentum that they never lost. Noah Bolling was able to score on an 8 yard run with 5:51 remaining gave Central a lead that wouldn’t be relinquished. Union would try to respond with a 9 play drive that would be all for not as they turned the ball over on downs at the Central 41 yard line with 1:45 remaining in the first quarter. Central would then chunk their way down the field with C.J. Crabtree and Bolling. A pair of twenty yard runs from each would eventually set up a one yard keeper from quarterback Ethan Mullins to make the score 14-0 with 9:12 remaining in the opening half.

Another three and out from Union surrendered the ball back to Central and the Union defense had seemed to rise to the occasion as Jacona Hernandez sacked Mullins to force a third and 34 from the Bears 40 yard line. Central tried to gain some of the yards back to pin the Bears deep but poor tackling from the Union defense saw Crabtree break free for a 60 yard touchdown run to make the score 21-0 with 3:08 remaining in the first half. Desperate for any kind of points and momentum before the half, Union got big plays from Malachi Jenkins on a 10 yard reception on third down and a 15 yard run from Mason Polier that set them up just inside the Central 30 yard line. Two incompletions and a wild snap later, the Bears had to settle for nothing as they limped in to the locker room facing their largest deficit of the year. Central received the opening kickoff of the second half and had put a methodical drive together before Union was able to pounce on a Crabtree fumble at the Bears 48 yard line. Five carries later from Polier the Bears were on the board. A 10 yard touchdown sprint from Polier made the score 21-7 with 3:58 remaining in the third quarter.

The Bears defense forced a turnover on downs on the Warriors next possession as they went into the fourth quarter. A promising Union drive would be ruined by a sack from Daniel Hawkins to put the Bears 11 yards behind the chains. Quarterback Brody Gibson would be intercepted two plays later by Ethan Mullins at the Warriors 2 yard line with 5:34 remaining in the game. The Union defense would be able to force a punt but a penalty for too many men on the field on the punt would give the Warriors an automatic first down with just under four minutes remaining in the contest. Union would eventually get the ball back with 2:45 remaining and no timeouts. Another sack from Hawkins on second down forced a third and long for the Bears. Gibson would come back and complete two strikes to Tadyn Roark to move the chains with a little more than two minutes showing on the clock. On the next play, a false start penalty would negate a 30 yard touchdown pass to Malachi Jenkins and move the Bears back to the Warrior 36 yard line. A 35 yard pass completion would set up a 1 yard touchdown plunge from Polier but the PAT attempt was pushed wide and made the score 21-13.

The onside kick was recovered by the Warriors with no drama as they held on for the biggest win on the football field in the schools short history.

“When you fall down 21-0 as well as they were moving the football and you can’t get stops, It’s hard to come back. They didn’t have to throw the ball because we weren’t stopping them but give those guys credit, they’re playing good football. As for us, we’ve just got to grow up and move on from it.” Added Turner.