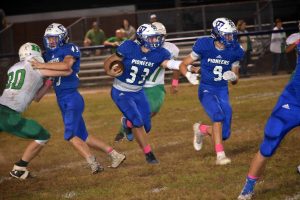 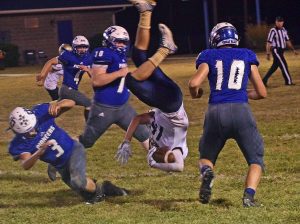 The season in Ewing for the Thomas Walker Pioneers has started on a high note. The Pioneers are 5-1 for the first time since 1996. Third year head coach Nick Johnson has the squad from Virginia’s most western high school clicking as they travel back to his Buchanan County roots on Friday.

Thomas Walker is set to make the trek to Pilgrim’s Knob this Friday to take on the Twin Valley Panthers. This will be the fifth meeting between the schools with the overall record being an even 2-2.

Twin Valley won the matchups in 2015 and 2016 while Thomas Walker has been victorious in the last two meetings in 2017 and 2018. Every meeting has been lopsided with the closest game being in 2016 with Twin Valley winning 57-40.

Thomas Walker boasts victories over Cumberland Gap, TN, Castlewood Rye Cove, Harlan, KY and Hancock County, TN in the first six weeks of the season. The lone loss came to Pineville, KY on the road in the Bluegrass State by a score of 26-6 on September 27.

The Thomas Walker Pioneers have been a pleasant surprise this season as they currently hold the number two seed in the VHSL Region 1D playoff standings. Thomas Walker capped off a two game home stand with a 54-24 victory over Hancock County, TN last Friday night. Zack Kidwell led the Pioneers with 160 yards through the air and three touchdowns. Dalton Langley, Jason Cowden and Logan Ely were on the receiving end of each of Kidwell’s touchdown tosses. The Pioneers rushing attack was also in prestige form as Kenny Ball dashed for 159 yards on the ground and three scores of his own.

Thomas Walker’s offense has been explosive this season, having scored 30+ points four times this season, while junior linebacker Jaron Warf leads the stingy Pioneer defense, which has only allowed 18 points per game. Ethen Hounshell, Clayton Hensley, Tyler Blevins, Dakota Stables and Reece Cope are all anchors along the offensive and defensive fronts for the Pioneers.

Jeremy Ward and the Twin Valley Panthers are set to welcome Johnson and the Pioneers to Oakwood on Friday with hopes of getting its first home win since October 4, 2018. The Panthers fell last Friday to intrastate rival River View, WV by a score of 58-28.

Twin Valley has been struggling on both sides of the ball this season. Their offense has sputtered only averaging 20 points per game while their defense is surrendering nearly 40 points per game.

Twin Valley is led by do it all tailback and defensive back Xzavier Ward. Ward can beat you between the tackles in the running game or stretch the field in the passing game. Tylor Keen and Wade Cantrell have both seen time under center this season for the Panthers. Dustin Jones and Jeighkob Cooper will also see targets for the Panthers passing attack. Larry Justice will also receive carries out of the backfield. Dalton White anchors a very small but athletics Twin Valley line.

One thought on “Thomas Walker travels to Twin Valley, looking to add to playoff resume”