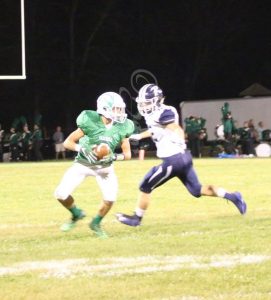 There was electricity in the air at Ernie Hicks Stadium on Friday night, as Richlands upended previously unbeaten Radford 45-28.

Behind the arms — and legs — of senior quarterback Cade Simmons, Richlands (2-3) was able to run past the top ranked Radford Bobcats (4-1) out of region 2C.

Simmons generated five touchdowns on the night, two by air and three by running.

Aided by an early Radford fumble, the Blues struck first on a 2-yard touchdown plunge by Simmons to take the early 7-0 lead.

Radford would come right back, however, on the legs of Zane Rupe. He scored the first of three rushing touchdowns late in the first quarter to knot the game at 7.

Richlands answered, again on the ground after big runs from junior back Logan Steele. Simmons snuck the ball in and the Blues took a 21-14 lead that they would never relinquish.

The Blues would add a touchdown from Simmons and a Forrest field goal to hold a 31-14 lead after 3 quarters.

The Bobcats would try to make a comeback, scoring twice in the fourth quarter, but Richlands was able to answer each time to hold on with a season-defining win.

The Bulldogs have found ways to win after suffering season-ending injuries to multiple playmakers on both sides of the ball.

The Dogs will be without Jordan after he and a Honaker player were both ejected during last weeks game.

Look for young players Cassius Harris and Schuyler Lawson to bear the load with Nunley in a ground-orientated Tazewell offense.

Richlands will look to continue with the formula that has worked well the last several weeks: run the football early and often.

Steele, WR/RB Sage Webb, RB Zack Gillespie and Simmons could all see time in the backfield as coach Greg Mance and company will look to run to set up the pass.

Tazewell has not beaten Richlands since September 5, 2003. That was 5,780 days from tonight’s game.

Look for a packed house, an amazing atmosphere and some hard hitting football at Bulldog Stadium in this latest edition of the Backyard Brawl.