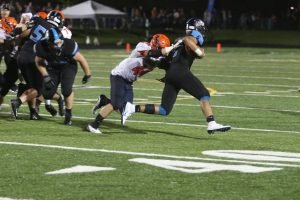 Four coaches that had an enormous impact on two programs that continue to be the mecca of high school football in Southwest Virginia.

Union, now led by Travis Turner and Ridgeview being led by Rick Mullins still have some pretty daunting names manning the sidelines on Friday nights. Both teams have one goal in mind and that is a Mountain 7 championship. One team will be one step closer in reaching that goal after Friday nights prime time showdown between the two teams.

Union had gone 3-0 against the Wolfpack from 2015-2017, winning each contest pretty handily. That was until last September, when the Ridgeview Wolfpack put Southwest Virginia on notice as they earned a 27-14 victory over the Union Bears on Rose Ridge. It would be the Packs first victory over Union in the short history of the program. Neither team would go on to win the Mountain 7 however, as the Abingdon Falcons would lay claim to that title. Ridgeview would go on to win their first playoff game in program history over the Wise Central Warriors before bowing out to the Richlands Blue tornado in the Region 2D semi-finals. Union would also earn a quick exit in the playoffs after defeating John Battle, the Bears would lose to eventual state champs, Graham in the Region 2D semi-finals.

Fast forward to October 2019. Both teams are of the elite programs in the state and are viewed to once again make runs in the playoffs come November.

Ridgeview, the Mountain 7 preseason favorite, is coming off of a bye week with an undefeated record at 5-0 and 3-0 in Mountain 7 play. The high flying offense of the Wolfpack has lit up the scoreboard all season long on their way to averaging 48 points a game while only surrendering 15 points a game to opponents. Leading their offense is Division 1 prospect Trenton Adkins. Adkins, a Junior, has rushed for 1,478 yards and 23 touchdowns on the season. Quarterback Nick Phillips is very capable with is legs as he has scored two touchdowns on the ground and is very capable of breaking long runs once he is flushed from the pocket. Phillips has thrown for 430 yards on the season with 5 touchdowns. Brandon Beavers has proven to be a reliable receiver for the Pack and Kanin Lewis also gets plenty of touches out of the backfield throughout the game to spell Adkins when needed. Adkins leads the defensive unit that has looked like one of the top units in the area. Alijah Sproles and Cannon Hill are fast and physical from their linebacker spots. Caden Gibson anchors the defensive line.

Union is coming off of its first loss of the season, a 21-14 setback to the Paintsville Tigers. Not only did Union lose the game but they also lost Sophomore tailback Zavier Lomax to injury for a few games. Lomax had his best game of the season against Paintsville as he churned out 82 yards rushing on 16 carries before exiting late in the contest. Union will rely heavily on senior fullback Mason Polier. Polier has rushed for 750 yards and 15 touchdowns on the year. Senior Bryce Guerrant will also look to garner more carries in the coming weeks. Freshmen Peyton Honeycutt and Johnny Satterfield could be on the cusp of earning carries for the Bears as well as senior playmaker Antwun Jenkins will be more heavily involved. Quarterback Brody Gibson has thrown for over 550 yards and 5 touchdowns this season while spreading the ball around to a plethora of receivers. Alex Rasnick, Daemi Lester, Malachi Jenkins and Antwun Jenkins have all proven to be reliable targets for the first year signal caller. The Jenkins tandem has proven to be a strength for the ball-hawking secondary of the Union defense. Rasnick, Lester, and the Jenkins duo all have interceptions under their belt. Polier has a pick six on his defensive resume to go along with 75 tackles, 2 sacks and 3 forced fumbles. CJ Jones and Trey Smith will also be called upon from their linebacker spots to slow down the high octane Ridgeview offense. Tanner Jervis, Jacona Hernandez and Gavin Perry will look to bring pressure from the interior and the edges from their defensive line spots.

“I think us playing at home will be a boost for us.” Said Quarterback Brody Gibson. “Playing the schedule we’ve played and being in tough games all season long has prepared us for a game like this. We’re all excited, this is what you play for.”

For Union, slowing down Adkins is the obvious key along with trying to force Ridgeview to play behind the chains. Ridgeview will look to make Union put the ball in the air to beat them while trying to corral Polier and the Bears rushing attack.

“Adkins is a great player and we have a ton of respect for him.” Noted Senior Mason Polier. “The key is to tackle. We have to get ourselves in good position and we have to tackle really well. Last years game is in the past and we are solely focused on this game. We’re ready to come out this Friday and get after it and just sound football.”

The atmosphere is sure to be electric this Friday and an overflow crowd is expected. Kickoff is set for 7 p.m. inside the legendary gates of Bullitt Park.

WCYB will televise the game on FOX WEMT.