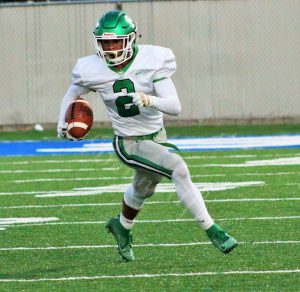 The Tazewell Bulldogs are coming off an thrilling win in Princeton. J’me Harris’ squad is touting a 3-1 record, with wins coming against Virginia High, Mount View, & Princeton.

In last week’s win against the Princeton Tigers the Bulldogs jumped out to a fast start, with halfback Chancellor Harris rushing for 95 yards on only six carries and a touchdown in the first quarter alone. Unfortunately the touchdown rush was Harris’ last of the game as he left the contest early with a leg injury.

In his absence the Bulldogs were able to pick up yards behind the legs of quarterback Gavin Nunley. Nunley finished with 98 yards on 17 carries, and was also efficient through the air, completing 7 out of his 9 passes. Tazewell’s defense was tough throughout, forcing Princeton into 4 turnovers. Cade Myers, Josiah Jordan & Jared Mullins all came up with interceptions for the ‘Dogs. Special teams were also a big part of the win, as Jaden  Taylor’s 69 yard punt flipped the field position for Tazewell, which subsequently allowed for Tanner Wimmer to kick a 36 yard field goal in the last two minutes to win the game 10-7.

The Bulldogs, plagued by injuries, will be breaking in some new players tonight. Look for freshman running back Braxton Dowdy to play a big role on offense, and Schuyler Lawson to fill in at defensive back.

Honaker is coming off a huge Black Diamond District win over the Grundy Golden Wave.

Longtime head coach Doug Hubbard’s son Chandler filled in at quarterback for the Tigers and led Honaker to their first score of the night on a 42 yard scamper. While Grundy kept it respectable for a short time in the first half, it would soon become the Trevor Dye Show. Dye shredded the Wave defense, finishing the game with 260 yards rushing and four touchdowns. Dylan Casey chipped in with 83 yards on the ground and two scores, while Hubbard added 58 and the one touchdown himself.

The Tigers come into this matchup at 3-1 with wins over Lebanon, Twin Valley & Grundy, with their only hiccup being a 26-24 week two loss against their Russell County foe Castlewood.

This will be 15th meeting between the two schools, with the Bulldogs leading the series 9-4-1.