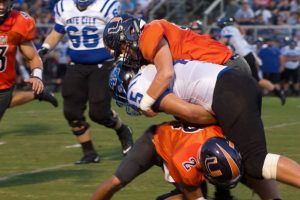 With two big games looming in the coming weeks, it would have been easy for Union to overlook a one win Gate City team. The Bears, however, were quick to apply pressure to the Blue Devils.

Two first quarter touchdowns and a 21-0 lead at halftime proved to be enough to propel Union to a 28-14 victory on homecoming night at Bullitt Park.

“One game at a time. That’s the approach we take.” Said Bears head coach Travis Turner. “We got off to a really good start, going up twenty one to nothing pretty quick but we had a couple turnovers that stalled some drives and killed our momentum.”

it was a quick start indeed, as the Bears crossed the goal line in five plays on the opening drive. A five play drive that only chewed up a little over a minute and a half of clock, was aided by a 47 yard run from Antwun Jenkins down to the Gate City 7 yard line. Two plays later, Zavier Lomax bulldozed through a trio of Gate City defenders into the end zone to put the Bears on top 7-0 with 10:17 remaining in the first quarter. After forcing a Gate City punt, it only took three plays for the Bears to find the end zone. Mason Polier burst through the line to sprint 65 yards to paydirt and extend the lead to 14-0 with 4:03 remaining in the opening frame. Tanner Jervis, Gavin Perry and Trey Smith were making a living in the Blue Devil backfield as they were up to the task of stuffing the running game led by 260 pound fullback Michael Calhoun. After a Gate City three and out, Union broke out their passing game on the next drive. Receptions from Antwun Jenkins and Daemi Turner, as well as a 27 yard run from Jenkins, helped set up a one yard touchdown plunge from Polier. Crist stayed perfect on his PAT attempts and Union pushed the score to 21-0 with 11:40 remaining in the half. After the Bears helped the Gate City defense out with a couple turnovers before half, the Union defense never allowed the Blue Devil offense to gain any traction. 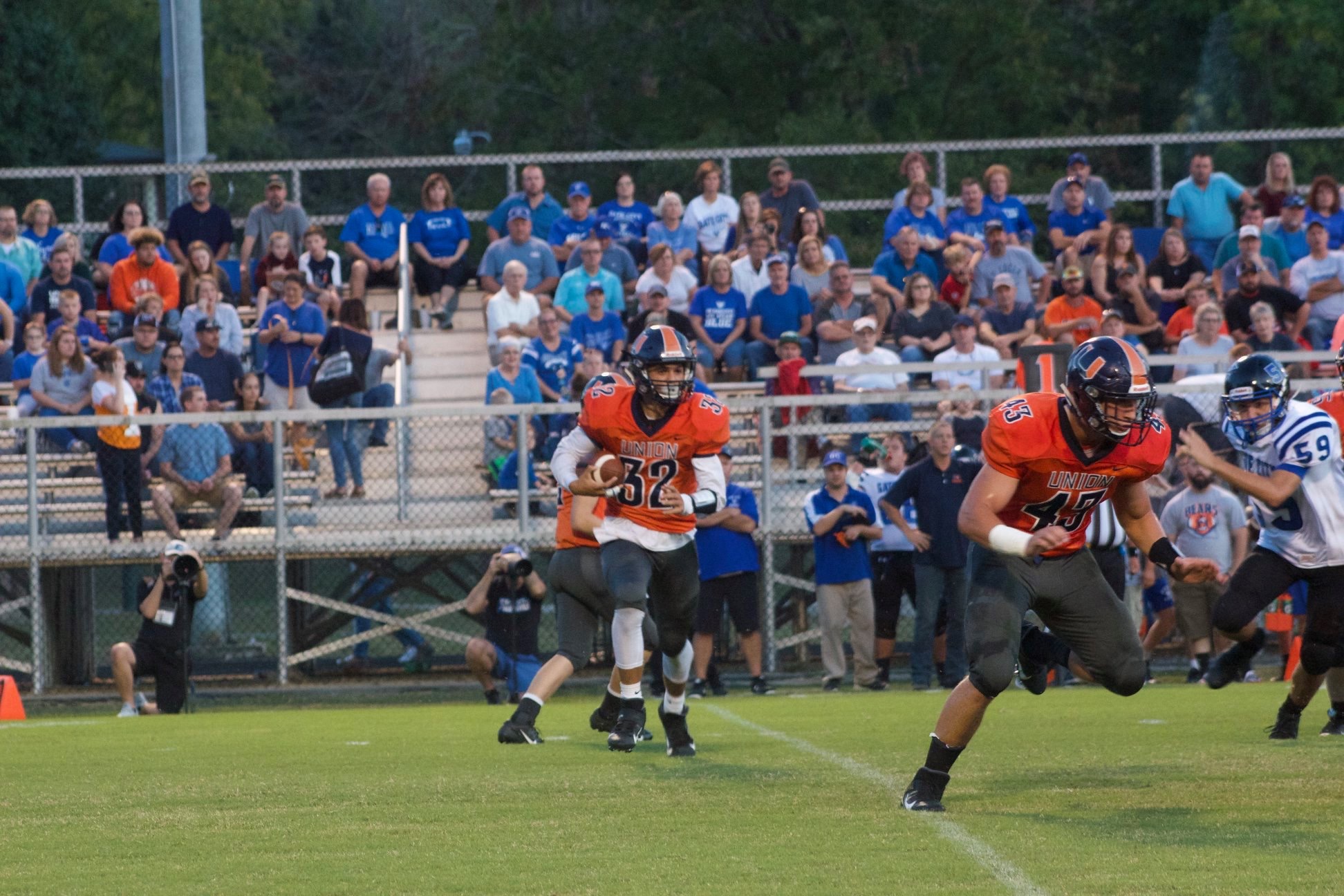 Gate City would gain a little traction in the second half as Calhoun rumbled 65 yards down to the Union 10 yard line on the first play of the half. The Bears defense would not break as CJ Jones accumulated a sack on third and goal and Daemi Lester broke up a pass on fourth and goal to give the Bears possession at their own 20 yard line. Union would give the ball back after Brady Edwards pounced on a Bear fumble. A 35 yard run from Landon Blanton would set up a 3 yard touchdown run from Calhoun. The two point conversion failed as the lead was cut to 21-6 with 6:15 left in the third quarter. After seeing Gate City earn their first points of the game, Union set out on a 13 play 76 yard drive that chewed up more than seven minutes off of the clock. An 8 yard carry by Lomax set up a 2 yard touchdown run from Polier to push the lead to 28-6 with 11:55 remaining in the contest. Thanks to a personal foul penalty on Union on third and long, Gate City would be able to extend their next drive and cap it off with a 11 yard touchdown run from Calhoun. The two point conversion run looked to be short but it was deemed successful as Gate City cut the lead to 28-14 with 7:16 remaining in the game. With the Gate City faithful on their feet, quarterback Brody Gibson delivered a 14 yard strike to Lomax on a third and 8 to extend the drive. A holding penalty later in the drive would negate a first down run by Lomax and force Union into a third and long situation. After a run that failed to get back to the line of scrimmage the Bears would be forced to punt the ball back to Gate City with 2:50 remaining in the game. As Gate City began their drive in hopes of making a comeback, Union defensive back Alex Rasnick would put an abrupt end to their wishes as he stepped in front of Luke Reeds pass to seal the fifth victory of the year for the Bears to move them to 5-0 on the year and 2-0 inside the Mountain District. Gate City would fall to 1-4 overall and 0-3 in Mountain District play.

“We have a tough opponent in Paintsville next week. They’re one of the top teams in the state of Kentucky. We’re going to take it one game at a time and get ready for next Friday.” Stated Turner.

Calhoun would rush for 158 yards and 2 touchdowns on 19 carries. Logan Tomlinson would also eclipse 100 yards on only 10 carries.

Polier would lead Union in rushing with 102 yards and 3 touchdowns on 14 carries. Zavier Lomax would add 61 yards and 1 touchdown on 12 carries. Antwun Jenkins continues to fill up the stat sheet with another complete performance. Jenkins ran for 89 yards on 7 carries and caught 3 passes for 71 yards. Quarterback Brody Gibson completed 5 of 9 passes and threw for 102 yards.

Union will play host to the Paintsville Tigers Friday night at Bullitt Park and Gate City will hit the road and make the trip up interstate 81 to tangle with George Wythe.