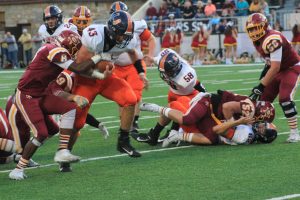 Gate City made a splash throughout Southwest Virginia in week 1 with a 34-29 victory over Richlands at Ernie Hicks Stadium. Since then the Blue Devils (1-3, 0-2) have cooled down a bit. Coach Jeremy Houseright’s team took Abingdon down to the wire in week 2 but since have suffered two lopsided defeats. A 42-12 decision to Sullivan South and a 42-7 loss on Rose Ridge to the Ridgeview Wolfpack.

Gate City presents a physical rushing attack led by senior bruiser Michael Calhoun. Calhoun is a physical down hill rusher who has been known to break long runs once he gets to the second level, he rushed for 90 yards on 12 carries last week against Ridgeview. Carson Jenkins is a proven playmaker in the running and passing games. Gate City’s front is led by four year starter Kurt Gibson.

Union is coming off of their biggest victory of the season. The Bears traveled to Bluefield last Friday and kncked off the highly favored Graham G-Men. The Bears put together a complete team effort to put away the G-Men. Mason Polier rushed for 200 yards, two touchdowns and returned an interception for a touchdown. Quarterback Brody Gibson threw for 132 yards and two touchdowns. Gibson also drove the Bears 66 yards down the field to set up the game winning field goal. Antwun Jenkins found himself on the receiving end of two touchdowns and Koby Crist kicked the game winning field goal with 5.7 seconds remaining. The Bears got many contributions from more players throughout the game to propel them to the 37-35 victory. The likes of CJ Jones, Jacona Hernandez, Malachi Jenkins, Alex Rasnick and Daemi Lester have been the unsung heroes on the defensive side of the ball for the Bears, a unit that has been solid during the early part of the season.

It is homecoming week for the Bears as kickoff is set for 7 p.m.