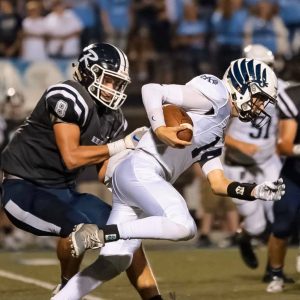 That result looked shaky in the first quarter. Abingdon (2-2) opened the game with an 80-yard drive that ate up 8 minutes and 42 seconds off the clock. Star RB Lucas Martin punched the ball in from the 3, and the Falcons took a 7-0 lead.

Richlands (1-2) would quickly respond. Simmons pulled the strings on a drive that saw him scramble for a 41-yard gain, as well as punch it in himself from the 5. He also used his hard count to draw the Falcons offside on a 3rd down and a big 4th down inside the red zone.

After a 3-and-out, Richlands got the ball back and Levi “Fle” Forrest showed off his cannon leg, nailing a 54-yard FG. It was Forrest’s 2nd 54-yarder of the season, one that also features a 59-yard bomb against Gate City.

But Abingdon wouldn’t go down without a fight. Lucas showed off his speed on the first play of the ensuing drive with a 69-yard run as part of a two-play, 80-yard drive to regain the lead 14-10.

Playing the night before his 17th birthday, Steele would take a 3rd and 21 halfback draw up the middle untouched for 80 yards, and the 17-14 halftime lead.

That’s all the Blues would need.

Switching from a 3-4 to a 4-3 defense, the Richlands defense held the Falcons without a touchdown for 23 minutes.

Meanwhile, Steele continued his night to remember with touchdown runs of 5 and 23-yards — adding a 4th quarter interception as well.

Steele finished his night with 157 yards on 18 carries with 3 touchdowns and an interception on defense.

Simmons was an efficient 11-14 for 100 yards, with half-a-century on the ground and a rushing touchdown.

Both teams now hit the road in week five. Richlands travels to perennial power Bluefield for a date with the 2-1 Beavers.

Abingdon makes the short trip down Interstate 81 to Bristol to take on the Vikings of Tennessee High.