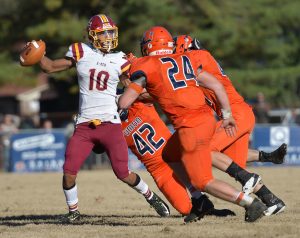 The Graham G-Men came in to Bullitt Park and ended any hopes of a state championship for the Union Bears and the overflow crowd that hoped to see their Bears advance to the Regional Final. The Bears offense was stymied in the contest, only producing points on a long touchdown run from graduated tailback Avery Jenkins. Cameron Allen, who you can now catch on Saturdays playing for the Purdue Boilermakers, completed 16 of 25 passed for 271 yards and two touchdowns to push the G-Men to a 28-7 victory.

Graham would go on to defeat Richlands in the Region 2D Chanpionship, 38-10, steamroll Radford in the state semifinals, 57-13 and claim the Class 2 state championship with a 31-9 win over Goochland.

Fast forward to 2019. The Union Bears sit at 3-0 overall and are averaging 36 points per game while surrendering only 10 points per game. A tall task stands in front of Travis Turners Bears. Graham sits at 2-1 overall with wins over Tazewell, 45-0, and Giles, 35-3. Their lone loss came in week one to Bluefield by a final of 41-27.

Graham is only surrendering 14 points per game while big play threat Devin Lester, who is committed to Old Dominion University, is fresh off a three touchdown performance to go along with 300 plus yards of total offense that he supplied for the G-Men.

Union has relied heavily on their ground game this year. Senior Mason Polier has rolled up 333 yards rushing on the season and 7 touchdowns, with Bryce Guerrant totaling 298 yards on the season. Guerrant had a 153 yard, two touchdown effort against Lee in week one. The Bears haven’t gotten much through the air this season, but Quarterback Brody Gibson has thrown three touchdown passes through the first three games. Alex Rasnick has been on the receiving end of two of those while Antwun Jenkins, who has proven himself as the Bears big play threat, has caught one touchdown pass from Gibson.

Defensively, Polier and CJ Johnson look to slow down the likes of Lester, Joey Dales and Xayvion Turner. Jenkins, Rasnick and Daemi Lester are focused on locking down the receivers and the Graham passing attack.

Both teams have struggled with penalties in the early going of the season, something both coaches would like to clean up. The game is surely the marquee matchup for Southwest Virginia and will definitely have the attention of people throughout the state. The stage has been set for what is sure to have an electric, playoff like atmosphere.

Graham is the early favorites but don’t expect Union to lie down. Both teams are well coached and set for a physical, hard nosed football game. Kickoff is set for 7 p.m. at Mitchell Stadium in Bluefield, WV.