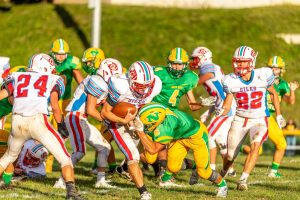 The town of Narrows will look like a ghost town Friday. Why you may ask? All of the Green Wave faithful will be at Stephen C. Ragsdale Field in Pearisburg.

Narrows (3-0) will travel five miles up route 460 to face their arch rival, Giles (0-3). While the series is lopsided in Giles’ favor, this is always an exciting game with a huge turnout.

Last year was the closest that Narrows got to ending the losing streak. The Green Wave shut the single-wing down for three straight quarters, leading the Spartans 7-0 late into the fourth. Giles managed to get a couple late scores and escaped Ragsdale Field with a 12-7 victory. Since 2017, the Green Wave have a 20-3 regular season record with two of those losses coming to the Spartans.

Last wee Narrows hosted Chilhowie, the back-to-back 1A runner-ups. Narrows won the contest 20-14 in a nail-biter. Matthew Morgan lead the Wave with 112 yards on the ground. Through three games, Morgan has 259 rushing yards on 34 attempts and one touchdown. Morgan is also a leader on defense and special teams. He leads Narrows with six sacks on the season, and he is an efficient place-kicker, making nine out of his ten extra point attempts.

Quarterback Chase Blaker joins Morgan in the backfield. Blaker has completed 19-of-36 passes for 278 yards with three touchdowns and one interception. He ran for 71 yards on 15 attempts in last week’s victory. Chase’s twin brother Chad also gets action in the back field sharing carries with Morgan. Chad Blaker has rushed for 177 yards on 24 carries with four touchdowns.

Giles is coming off their third straight loss with very tough schedule consisting of 4A Blacksburg, 3A Christiansburg, and the defending 2A state champions, Graham. The Spartans have struggled putting points on the board despite multiple deep drives in their opponents territory. In last weeks 35-3 loss to Graham, Giles made it inside the G-Men 30 four times but only accumulated three points, as they missed two field goals and threw an interception. The single-wing offense has proven to give the opposing defense a challenge, but Giles will need to finish drives if they plan on keeping the win streak alive against the Green Wave.

The Spartans are lead by fullback Dominic Collini and tailback Chaston Ratcliffe. The two combine for over 400 yards rushing and two touchdowns.

Giles’ defense has shown to come alive in this match up as they have not not allowed Narrows to score an offensive touchdown in the last two seasons.

For Narrows, a win this Friday will continue their run for an undefeated regular season for the first time since 1979.

As for the Spartans, a loss will hurt their chances of finishing .500 or better this season as they still have tough district play consisting of Radford and Glenvar.

The game will be played Friday at Stephen C. Ragsdale Field in Pearisburg. Kickoff at 7:00.