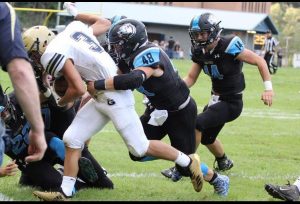 The intense grind that is the week in and week out competition in the Mountain 7 District gets a little more intense on Friday night.  The resurgent Gate City Blue Devils head to Dickenson County on Friday night looking to pull off their second huge upset of the season.

The Blue Devils began the 2019 season with a shocker, travelling to heavily favored Richlands and pulling a monumental upset. However, the momentum from such a stellar outing in Tazewell County has not carried on to the last two weeks.  Gate City has since suffered two straight losses to Abingdon and Sullivan South.

With the Blue Devils once again showing competitiveness, the football fever has returned to the tradition rich town in Scott County. A large contingent of Blue Devil Nation is expected to make the trip to the Ridge on Friday night.

Ridgeview has continued to dominate their opposition behind superstar running back Trenton Adkins.  Adkins now has 17 touchdowns on the season, to go along with 1,018 rushing yards in only three contests thus far. The goal will be simple for coach Jeremy Housewright’s defense on Friday night – slow down Adkins. That task was not simple for Wise Central in week three. Adkins was able to shed many tackles on numerous carries on his way to 369 yards and six touchdowns against the shell shocked Warriors.

The Blue Devils will be led on offense by bruising fullback Michael Calhoun.  The 265 pounder looks to punish Ridgeview and break numerous tackles of his own against the Wolfpack.  Calhoun amassed 92 yards on the ground in the win over Richlands.

The Devils do not throw the ball often, however when they do, Luke Reed is a capable thrower.  Carson Jenkins and Levi Rhoton also are notable ball carriers in the backfield for the Blue Devils.  Jenkins carried the ball for 134 yards on eight carries in the loss to Abingdon in week 2.  Rhoton amassed 86 yards on the ground against the Falcons.

The key matchup in the contest may come in the form of Ridgeview linebacker Alijah Sproles vs. Calhoun of the Blue Devils.  Sproles, the co-defensive Region 2D player of the year, will not see many players the size of Calhoun during the 2019 season.  Another emergence on the Ridgeview defense in the early stages of the season is in the presence of freshman Cannon Hill.  Hill has already impressed Wolfpack Nation with his tackling ability and field presence.

Another key difference could be the special teams battle.  The Blue Devils lost all state punter Drew Vermillion to graduation. Rhoton took over over for Vermillion, who also handled the kicking duties for the Blue Devils a season ago.  For the Wolfpack, Landon Knepp has been impressive so far.  The junior kicker has caused several touchbacks this year for the opposing team, kicking the pigskin into the endzone.

With Friday night’s showdown being a Mountain 7 District contest, the atmosphere promises to be electric with Blue Devil and Wolfpack Nation out in full force under the Friday night lights.