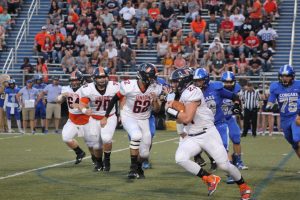 Patty Loveless and a variety of other artists sing about leaving Harlan alive, the Union Bears just wanted to leave Whitesburg with their unblemished record alive.

It was a Friday the 13th for the books in the deep, dark hills of Eastern Kentucky as the onlookers witnessed plenty of heavy rain, an hour and a half lightning delay, a plethora of penalties and even an ejection. After withstanding a furious effort from the Letcher County Central Cougars, Union was able to hang on for the 42-20 victory.

After the Bears had turnover on their first play from scrimmage, they used an eight play drive on their second possession to draw the first blood. Mason Polier took a handoff and rumbled in from 39 yards out. A botched snap on the PAT led to a pass from Daemai Lester to Landon Parsons to give the Bears an 8-0 lead with 4:06 left in the first quarter. 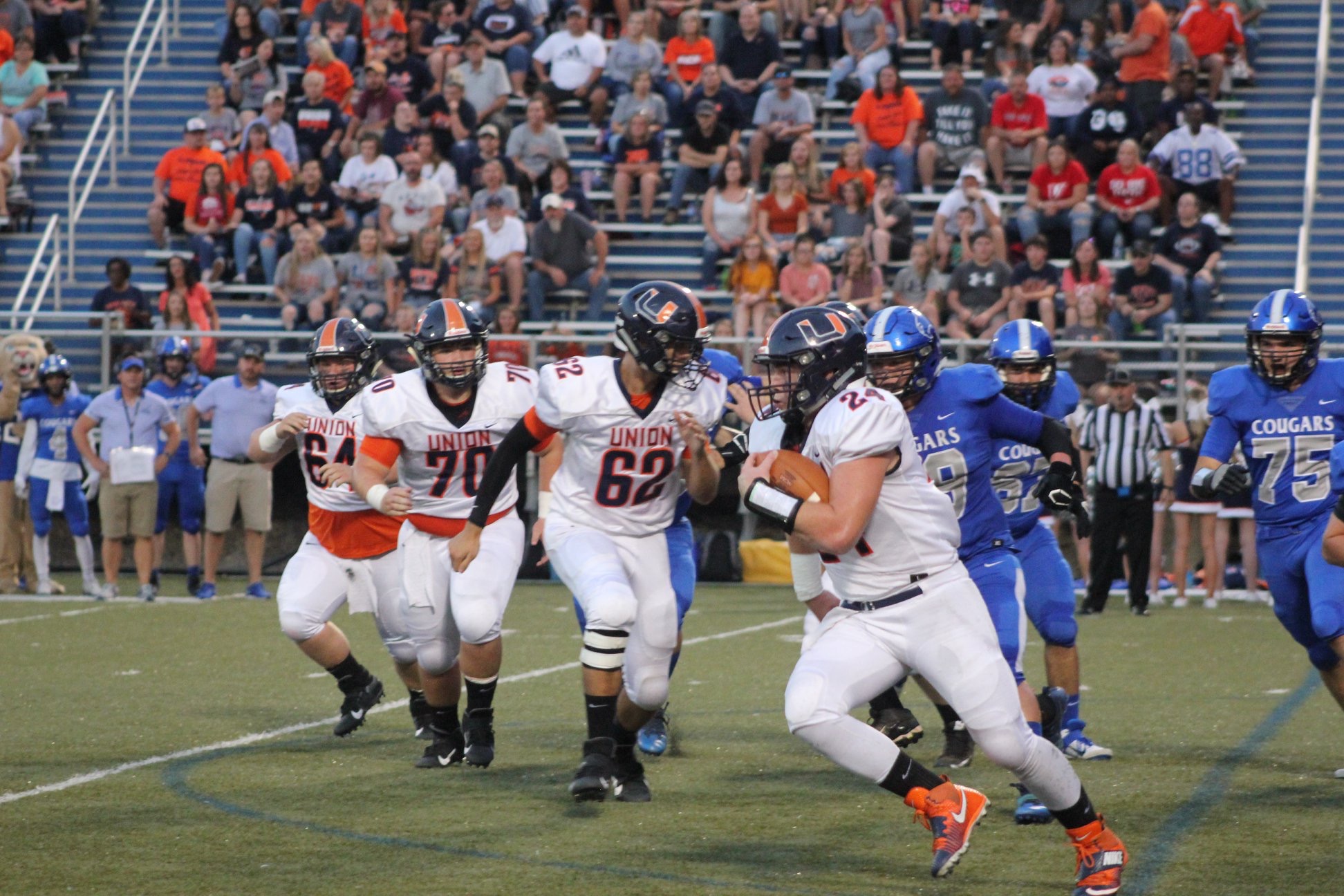 The Bears wasted no time adding to their lead. On the next possession, Bryce Gibson dropped a dime down the seam to junior receiver Alex Rasnick. The PAT failed and Union led 14-0 at the end of the first quarter.

Letcher cut in to the lead on the first play of the second quarter when they took advantage of a blown coverage assignment by the Bears secondary. Cougar quarterback Carson Adams threw a strike to Hunter Campbell for the 68 yard touchdown to make the score 14-6. After a turnover and a couple defensive stands, Union extended their lead 21-6 on a nifty 62 yard  run by Antwun Jenkins.

Shortly after the Jenkins touchdown run, the game stalled for an hour and a half due to lightning. Play would not resume until 10:10 p.m. With only 3:50 remaining until halftime Letcher took over and wasted no time in finding the endzone and making the score 21-12 with 1:40 left in the first half.

The Union offense took over and was able to get into the Cougar red zone with only one play. Bryce Guerrant busted through the Letcher line for a 40 yard gain down to the Cougar 20 yard line. Letcher did not surrender points easily as they forced Union to run five more plays before Polier squeezed into the end zone from a yard out as time expired on the first half clock. Koby Crist added the PAT and the Bears held a 28-12 lead at the half. 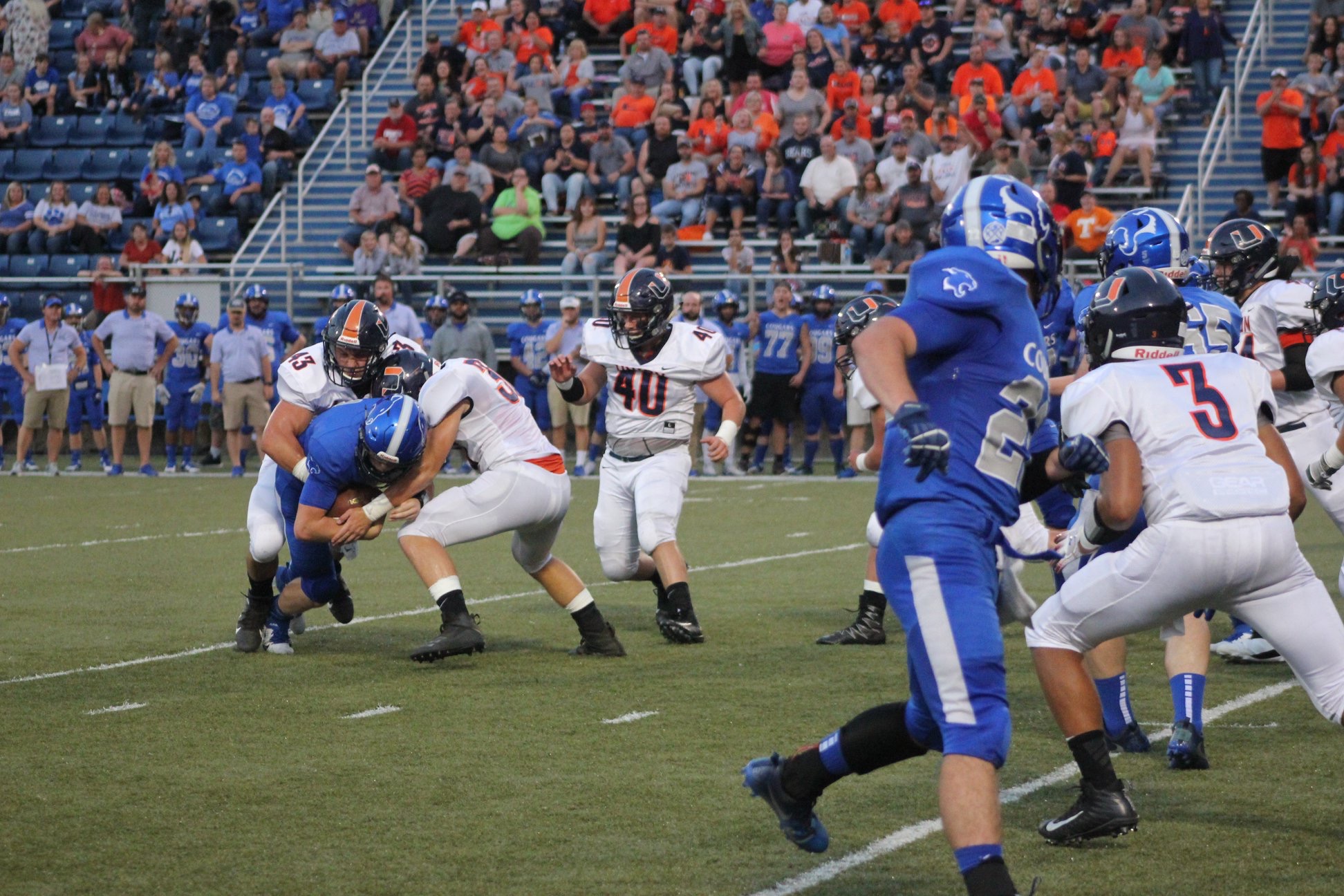 On the first possession of the third quarter, the Bears used a 22 yard run from Polier and a 40 yard jaunt from Guerrant to set up first and goal from the Letcher 2 yard line. With 10:17 left showing on the clock, Polier added touchdown number three on the night to push the lead to 35-12.

Letcher was aided by a number of Bears penalties on their next drive to close the gap to 35-20 with 8:44 remaining in the third quarter. With both teams exchanging defensive blows throughout the third and fourth quarters, it was Polier and the Bears who delivered the knockout blow with an 8 play, 87 yard drive that was capped off by a 25 yard touchdown run from Polier, who drug a couple defenders down the field and into paydirt with him. Crist added the PAT to make the score 42-20 with 3:42 remaining in the game.The Bears were able to get the ball back and bleed the clock out to hang on for the victory.

The Bears are set to travel to Bluefield this Friday to take on the reigning State Champions, the Graham G-Men. Kickoff is set for 7:00 p.m. at Mitchell Stadium.