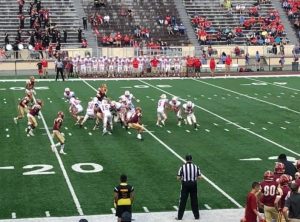 Giles (0-3) threatened to score multiple times deep in the Graham territory, but the G-Men defense stiffened up when they needed to, giving the Spartans their first 0-3 start since 2002.

Giles received the opening kickoff after Graham deferred to the second half. The Spartans slowly marched down the field on their opening possession using their ground-and-pound offense as well as one long 40-yard pass from Chaston Ratcliffe to Preston Whitlock. Giles ate up most of the first quarter on that drive as they took nine minutes off the clock during their 13 plays. After a failed third down conversion inside the G-Men 25, the Spartans had to settle for a 40-yard field goal from Whitlock.

It took less than a minute into their opening drive for Graham to find paydirt. After a 43-yard pass from Lester to Isaiah Justice, Tre Booker plunged into the end zone from four yards out. Graham lead 7-3 at that time and at the end of their first quarter.

After a failed Spartan drive to begin the second quarter, the G-Men got the ball with good field position and quickly struck again. After two plays Lester connected with Xavion Turner for a touchdown from 28 yards out with 10:32 remaining in the half.

On the subsequent drive the Spartans once again moved the ball downfield, but missed 47-yard field goal to end the half. At halftime Giles trailed Graham 14-3.

The G-Men ran into some penalty issues to start the second half that negated two scores. First it was a 70 yard kickoff return that was forfeited by an infraction, then a 60 yard TD reception from Joey Dales that was also called back for holding.

The Spartan offense battled on their first possession of the second half, driving down inside the Graham 20, but Ratcliffe’s pass was picked off at the 2-yard line. Two plays later, it was Lester who torched the defense with his legs on a long 87 yard TD run with 4:14 remaining in the third quarter, which seemed to take the steam out of Giles.

Lester accounted for his third score of the night when he connected with Marques Ray for a 33-yard touchdown with 1:06 left in the third quarter.

Ray added the last score for Graham as he was on the receiving end of a 45-yard touchdown pass from Jamir Blevins late in the fourth, sealing the 35-3 victory.

Graham racked up 434 yards of total offense to Giles 219 yards. Lester was 7-10 for 151 yards and two touchdowns through the air while adding 152 yards on the ground with a touchdown.

For Giles, Ratcliffe finished with 58 yards on 18 carries and threw for 55 yards. Dominic Collini rushed for 47 yards on 19 carries.

One thought on “Lester, Graham pull away late from Giles”