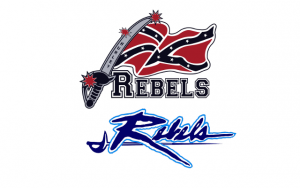 The Battle of the Rebels is set to take place at Smiley Ratliff Field in Hurley on Friday.

The matchup features a pair of unbeatens as Mark Palmer’s Patrick Henry Rebels will make the 66-mile trip to the Cliff to do battle with Austin Cooper’s Hurley Rebels.

The Austin Cooper era in Hurley could not have gotten off to a better start as the Buchanan County version of the Rebels look to go 3-0 for the first time since 2016.

A week ago at Smiley Ratliff Field, Hurley trounced Rye Cove by a score of 37-6. The home standing Rebels produced 486 yards offensively with 404 yards being churned out on the ground. Dustin Stinson led Hurley on the ground with 114 yards and a touchdown. Matt Justice scored two touchdowns for the Rebels while Chad Justice and Matt Blankenship also found pay dirt for Hurley in their second win of 2019.

Patrick Henry proved again in week two why it holds claim to the best backfield in southwest Virginia.

The Washington County version of the Rebels lit up the scoreboard in their 60-22 victory over Eastside last Friday. Mark Palmer’s squad had no problem finding offensive production, tallying 413 yards of total offense. 400 of those yards game via the ground game. Cody Smith led the group from Glade Spring with 162 yards and four touchdowns in the Rebels victory. Patrick Henry’s Zach Brown also amassed 133 yards and two touchdowns.

It is no secret that Palmer’s posse is going to lineup and run it down your throat. With the exception of Chilhowie, the Rebels have ran the ball with ease within the past year.

Friday will be the first meeting between these two schools. However, it will be the fifth time that Patrick Henry head coach Mark Palmer has faced the Rebels as a head coach. Palmer returns to the Cliff for the first time in nine years. The Ervinton alumnus is searching for his first triumph over Hurley in a coaching career that spans back to the 1980s. Palmer’s Ervinton Rebels squad fell to Hurley in 1990 and 1991 while Palmer’s Saint Paul squads fell to the Rebels in 2009 at Bowman Field and again in 2010 at The Cliff.