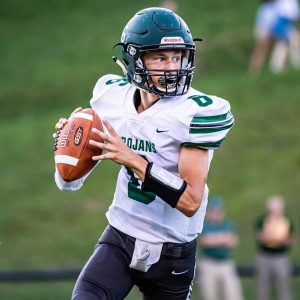 The John Battle Trojans (1-1) will host the Holston Cavaliers (2-0 ) on Battle Hill this week in a non district matchup.

This Washington County rivalry has been historically dominated by the Trojans who lead the overall series 24-5-0. Last year the Cavs returned two kickoffs for touchdown in an effort to upset the Trojans, but the end result was no different. Dylan Cunningham scored three touchdowns to lead the Trojans to a 37-20 win in a long game that was delayed two hours by a lightning storm. Other than Cunningham, the stout John Battle shined in the win, holding Holston to only one touchdown.

Both teams are coming off wins last week. The Trojans defeated the  Virginia High Bearcats 12-7 and the Cavaliers defeated Twin Springs 43-6.

For the Cavaliers, their main workhorse is running back Austin Farris. At 6’3″ 240 lbs, Farris was able to run through the Twin Springs defense for three touchdowns. Spelling him in the backfield is Jordan Ezzell. With Farris & Ezzell leading the way, Holston is averaging 48 points a game. Look for those two playmakers to get the ball early and often Friday night.

The John Battle Trojans are starting to find a identity on offense. With Virginia High stacking the box last week to stop the hard running of Cunningham, quarterback Walker Osborne showed that he is more than capable of making big plays himself. Osborne used his speed and toughness to gouge the Bearcats’ defense for big runs, and effectively threw the ball in passing situations. The Trojans defense was also very engaged, holding the super speedy ‘Cats in check for most of the ball game.

The injury bug has plaged the Trojans early in the season. Talented wingback/safety Zane Poe has been limited for two weeks because of a ankle injury and three year starter Bryson Denton is expected to miss another week due to a shoulder injury. Last week Coach Bradley Ricker did a very good job filling the holes that the injuries left, however the absence of Denton was very noticeable against the Bearcats outside run attack.

Coach Ricker should be able to get the job done again this upcoming Friday night behind his play calling and a veteran defense.