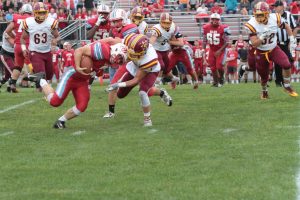 In week three of VHSL football, the Graham G-men (1-1) will host the Giles Spartans (0-2) at Mitchell Stadium.

While Graham’s biggest non-district rivalry will always be Bluefield, and Giles’ will be Narrows, the G-Men and Spartans have turned into a good match-up in recent years. Before 2013, the two schools only played each other four times, splitting the series. Since 2013, they have scheduled each other every season and the last three games finished with an exciting ending, all in Graham’s favor.

In 2016 Graham lead 14-0 at the break. Giles battled back in the second half and tied the game at 14, but the G-Men got a late touchdown in the fourth and sealed the victory.

In 2017, Graham lead 21-0 at the break. The Spartans got the single-wing moving in the second half and took the game into overtime. Graham escaped with a 35-28 victory.

Last season, Giles lost multiple starters early in the contest, and went into halftime trailing 14-0 at Ragsdale Field. Back up tailback Logan Greenway stepped up for the Spartans and rushed for over 120 yards in the second half. Giles trailed 21-13 late in the fourth but could not stop the G-Men from finding the endzone to seal the 28-13 victory.

While Giles doesn’t need to worry about former quarterback Cam Allen, who now plays defensive back for Purdue University, Graham has another D-1 athlete for the Spartans to worry about in Devin Lester. Lester, who has committed to Old Dominion University,  played defensive back and wide-receive last season for the G-Men. Head coach Tony Palmer made the choice to move Lester to quarterback for the 2019 season and so far it looks to be a good move. In Graham’s season opener 41-27 loss to powerhouse Bluefield, Lester compiled over 250 rushing yards, while adding over 100 yards through the air and accounted for two touchdowns. In last week’s 45-0 shutout over Tazewell, Lester threw for 162 yards and four touchdown passes.

Graham’s defense is also going to be a problem for Giles, as the G-Men returned most of their defensive starters from last year’s state championship team. The Spartans have struggled to put the single-wing in the endzone, only scoring 13 total points in their first two losses to Blacksburg and Christiansburg. Giles has made it deep into their opponents territory, but have had issues ending the drives with points. Senior fullback Dominic Collini and junior tailback Chaston Ratclife lead the single-wing attack for the Spartans. Collini has rushed for 180 yards through two games with one touchdown. Ratcliffe has 115 rushing yards and a touchdown as well.

Can the Spartans figure out a way to finish their drives and pull off an upset against the defending 2A state champs?

Or will the G-Men shut down the single-wing and force a second straight shutout?

We will find out Friday night at Mitchell Stadium. Kickoff is at 7:00.