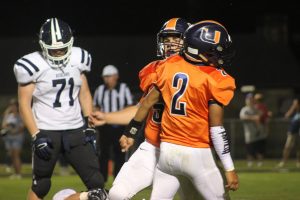 Coming off of 26-3 victory over Richlands last Friday night, the Union Bears set their sights on a trip to Whitesburg to sqaure off against the Letcher County Central Cougars.

The Cougars sport a 2-1 overall record with victories over Bourbon County, KY and most recently, Estill County, KY. The lone blemish on their record came at the hands of Shelby Valley, Ky, a 44-22 drubbing which occurred in the first week of the season.

The Bears (2-0, 1-0) have been powered by a stingy defense which has held it’s opponents in check the first two weeks of the season. Led by the likes of CJ Jones, Mason Polier and Antwun Jenkins. The defensive line has done a terrific job of causing havoc in the opposing backfield and the tight coverage from the secondary has surely been on display. Bryce Guerrant, Zavier Lomax and Polier head a physical running attack that was on full display last Friday night in which they used to wear down the Richlands defense. The offensive line of the Bears took control of the line of scrimmage in the second half to pave the way for their victory. They look to do the same this Friday night in a showdown of winning teams under the Friday Night Lights in the hills of Whitesburg, Kentucky.