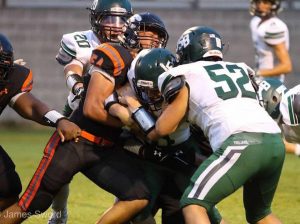 For years, one of the most storied rivalries in Bristol has been Virginia High versus John Battle. The first meeting was in 1963 and they have played each other 57 times with Virginia High dominating the series. John Battle has not won in the series since 2013. This year the Bearcats will come to Trojan Field with both teams coming off huge losses. New to this year is that the entire game will be broadcast on Fox 39 as part of WCYB’s High School Friday Night Game of the Week.

Virginia High comes in off a 35-14 loss to Tazewell, allowing 473 rushing yards. The Bearcats are coached by Michael Crist in his seventh year at the helm. Running back Stevie Thomas is a speedster and capable of breaking the long run on any play. Last week receiver Hunter Wright caught two touchdown passes. The Bearcats have been to the playoffs for 4 straight seasons and have a 5-game winning streak against the Trojans.

The John Battle Trojans return home after suffering a 45 to 14 defeat to the Abingdon Falcons last week. Coached by Bradley Ricker, in his first game as a head coach, the Trojans had few answers for the Falcons. Dylan Cunningham paced the offense with 76 yards rushing. Bryson Denton added a touchdown run and Gabe Blaylock had a receiving touchdown. Junior middle linebacker Seth Scarborough leads the Trojan defense.

This game is usually standing room only and with the game being live on TV, expect quite a crowd. Both teams need a victory but I believe Battle’s run game will be just a little too strong.