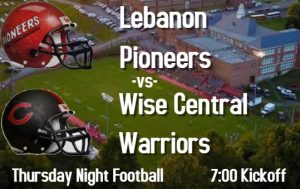 The Lebanon Pioneers host the Wise Central Warriors on Thursday night at 7:00pm. Both teams are dealing with a short week of preparation as it’s been coupled with the Labor Day holiday. The game was rescheduled due to Russell County Schools observing Fair Day on Friday. 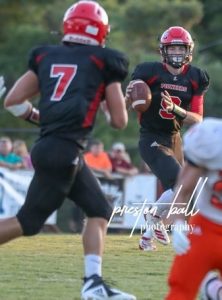 Coach Webb and his Pioneers have been hard at work given the short week. “Anytime you get out of your routine you worry. Hopefully we are prepared Thursday Night. I think for us the key is taking care of ourselves and getting back to doing what we did well in our scrimmages and we need to sure up our pass protection some.”

The Pioneers will look to give QB Casey White more time to find WR’s Casey Martin, Logan Smith, Alden Ward, and Caleb McGlothlin. Running the ball for Lebanon will be RB Fisher Martin and Alden Ward splitting carries. Defensively the Pioneers will have to account for Central’s speed. “Containment is probably the most important part of the defensive plan. If we let them get outside the hashes they will take a 5 yard gain and make it a 50 yard gain. But you have to honor the FB as well or he will gut you with traps,” said Webb. 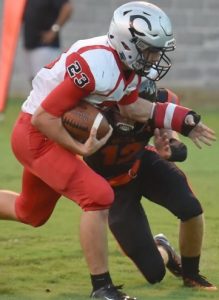 Speed is the name of the game for the Central Warriors and they have plenty of it at the skill positions. The Warriors’ offense leans heavily on sophomore RB CJ Crabtree who was rushed for over 1,000 yds last season. Fullbacks Matthew Boggs and Noah Bolling will also see several carries in the Warriors’ double wing offensive set. QB Ethan Mullins has plenty of deep threats at the WR position when Central spreads the field with the speedy Matt Peter, Ben Brickley, and returning senior Jalen Pratt. Expect the Warriors to mix things up early and often with the running game while looking to hit the deep routes off play action and QB roll outs. Defensively Central will hope to slow down Lebanon’s spread offense.

The forecast for kickoff Thursday night is a comfortable 75 degrees under partly cloudy skies. It should be a great night for football at Harry Stuart Field in Lebanon, VA.