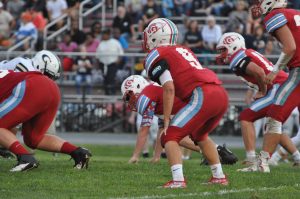 After falling to 4A Blacksburg 24-0 in their season opener at home, Giles (0-1) hopes to get in the win column in week two. The Spartans will travel across the Montgomery County line to Evans King Field to take on the Christiansburg Blue Demons on their new turf field.

Christiansburg (1-0) was victorious in their season opener as they took down Floyd 35-16 on the road. Along with hoping to end the seven year losing streak against Giles, the Blue Demons also hope to end the streak of four consecutive losing seasons. Christiansburg returns eight starters on offense but only five starters on defense.

MJ Hunter is one of those offensive starters that returned from last season. The 5’10 165lb junior is the Blue Demons’ quarterback. Last season Hunter passed for 829 yards and eight TDs. He is joined by his go to returning wide-receiver Caleb Henley. Henley lead the team with 41 receptions for 678 yards and seven TDs last season. Maston Stanley will join Hunter in the backfield. The 6′ 200lb senior rushed for 181 yards and three touchdowns on 26 carries in last week’s victory over the Buffalos. 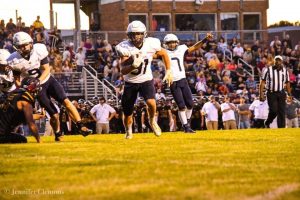 Even without the scoreboard reflecting it, Giles had some success against Blacksburg. The Spartans rushed for more than 150 yards in last week’s loss to the Bruins, however, They struggled they turned it over on downs three times inside Blacksburg’s 20-yard line.

Leading the single-wing attack for the Spartans is junior tailback Chaston Ratcliffe and senior fullback Dominic Collini. Ratcliffe rushed for 57 yards and had 42 yards through the air last week. Collini rushed for 77 yards on 22 carries. 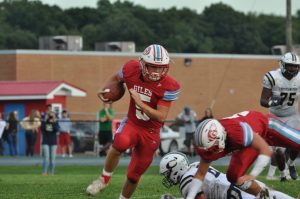 Giles won last year’s contest 33-14 and leads the overall series 28-18-1. The game will be played at Christiansburg High School on Friday, kickoff at 7:00pm.