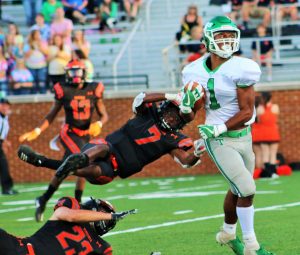 EMORY, Va. — After losing a substantial amount of production to graduation, most Bearcat fans knew the 2019 campaign had the potential to start on shaky ground.

After the Bristol Pirates clinched their first playoff berth in 17 years, it was announced that the game would be moved to the new turf at Emory and Henry’s Fred Selfe Stadium. In their first home game away from Gene Malcolm Stadium since 1971, the Cats’ defense was torched by Tazewell’s rushing attack to the tune of 473 yards and a 55-14 setback

Harris in particular took advantage of the spotlight — scoring 5 total touchdowns and racking up 263 total yards.

After losing four straight to the Cats — including last year’s 37-30 barnburner, the Bulldogs came into this matchup fired up and ready to show SWVA the strides they had made in their third year under head coach J’me Harris. Message received.

The lone bright spot for the Cats came as Gage Richard found Hunter Wright on a pair of 40-yard touchdowns. Vaunted sophomore running back Stevie Thomas was held to 61 yards on 21 carries.

The Cats must regroup for this week’s City-County Bowl against archrival John Battle (0-1) who themselves were blown out by Abingdon 45-14. Virginia High has not lost to the Trojans since 2013 and will need to make some changes to keep the streak alive.