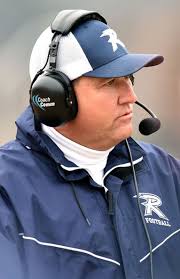 Unpredictability – noun, the inability to be predicted, changeability.

In my 32 years of travel on this earth, the not knowing of the outcome has always kept me on my toes and made me wary of things that were deemed “certain.”

Sometimes it’s something as small as a gas station hot dog. Most of the time delicious and hitting the spot, the mystery meat spinning on that heated wheel can sometimes ruin what was supposed to be a great day by keeping you closer to a bathroom than you had anticipated.

Other times, it’s an impromptu wedding in a Gatlinburg Tennessee chapel. Yeah sure, a petite blonde in cutoff jeans shorts climbing from a restored 1978 Chevy C10 seems like love at first sight but weeks later, when the annulment window has expired, and you awake find that everything but the cat is gone, you realize that unpredictability is downright unfair sometimes.

In the long history of Richlands Blue Tornado football, they are numerous stories deeply rooted in unpredictability.

Even the beginning of football at Richlands was unpredictable. Ernie Hicks, making his way up from Tennessee, didn’t even like the town at first and had only planned to stay for one year. One can’t entirely blame the guy, in the early 1920’s Richlands didn’t even have one Hardee’s, much less the two we are blessed with today. One might wonder what the man dubbed as “The Master of the Clinch” would think about hordes of cats and ducks now roaming on the land that was the first gridiron in town that bared his name.

Decades after Ernie had passed; a young Giles County native looked to pick up the pieces of a broken program. Statewide, Richlands football had been dubbed by many as a team no one wanted to play, going as far as Indiana to find teams to fill a schedule. After the 1992 state championship run, and a few other incidents years later, those from the outside looking in, had a bad taste in their mouth when speaking of the Blue Tornado. When 1997 came along, and the Vaught era had ended for the second time, the head coach job of the Richlands football program was available. Greg Mance decided to throw his Titleist visor into the ring.

Greg Mance played baseball at Virginia Tech after winning a football state title on the field at Giles. At the time of the coaching search of ’97, Mance had no head coaching experience at the varsity level. He had been an assistant to Vaught on the ’92 staff and even before with Billy Haun at the helm of the football program, and as Keith Hovis’ right-hand man on the diamond.

When Mance was awarded the job before the ’97 season, it was stated by some that if he made it four years, it would be a miracle and understandably so, after all, what other football knowledge besides the single-wing did this guy have?

It was almost unpredictable what would transpire over the next twenty-plus years.

The unpredictability factor kept us tuned in.

In the professional sports world, where people are paid to not only play but also predetermine outcomes, one of the most unpredictable finishes in history was the 1986 World Series between the New York Mets and Boston Red Sox.

1986 was the year for Boston to earn their first milestone in decades. Joe Castiglione, current Boston Red Sox radio broadcaster, was on the way to the visiting clubhouse at Shea Stadium in New York towards the end of game six of the 1986 World Series. The Champagne was ready, the lockers covered in a tarp, and the Red Sox were about to celebrate their first championship since 1918. Joe tells the story of hearing a roar on his trip down the ramp and not knowing what had happened on the field. Once to his destination, the then Red Sox reporter would find that an error by first baseman Bill Buckner essentially allowed the Mets to win that pivotal game and then the series. Workers moved frantically to erase the would-be celebration material before the disappointed Red Sox team made their way down the tunnel.

Very similar, last night at Ernie Hicks Stadium, the celebration was put on hold for Greg Mance’s 200th career victory. No it wasn’t a tainted hot dog or a deceitful blonde in a half-ton pickup in the way of history, but more so a tank in the form of a Gate City fullback keeping the ball away from a potent Richlands offense in the latter moments of a game that Bristol Herald Courier predicted 35-0 in favor of the Blue Tornado. Even Vegas would warn those who take stock in the region’s sports leader grid predictions when they give the Blues a +35 line. (See Tazewell 2003.)

At the end of the day, the town of Richlands, the Blue Tornado football program and its fans (even those who leave early) won’t have to wait years, like the Red Sox organization did for their first championship since 1918, or like I did to finalize a divorce in Tennessee, to celebrate the play-caller from Pembroke’s career milestone.