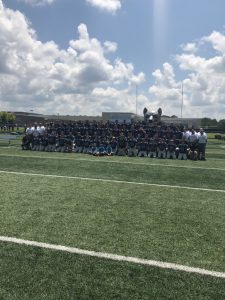 In the short four year history of the Ridgeview Wolfpack football program, there have been some ups and some downs.  The 2018 season would classify as a trend in the upward direction.  Ridgeview had its most successful season to date, finishing with a 10-2 record and runner up in the highly competitive Mountain 7 District for the second straight season.

The Wolfpack earned the top seed in the Class 2, Region D playoffs and won their first ever playoff game before falling to Richlands in the Region D semifinals.  The Wolfpack will look to continue their success in 2019 with returning district players of the year, Trenton Adkins and Alijah Sproles.

Adkins, arguably the top running back in the Mountain Empire, finished with nearly 2,000 yards rushing a season ago and continues to rack up letters from coaches at major D1 institutions.  Sproles, the M7 defensive player of the year, brings his havok style of aggressive playmaking from the linebacker position.

Despite losing the likes of Matthew Sexton, Tyler O’Quin and older brother McKenzie, Alijah is looking for an exciting 2019 season to come.  “I feel as if we have the potential to have a great season, maybe better than last year,” Sproles said.  “Coach (Rick Mullins) tells us in practice, ‘The media can expect us to succeed, but in order to achieve success, we have to push ourselves and each other as a team.”

Alijah and McKenzie, known affectionately as the “Legion of Boom” to the Rose Ridge faithful, were inseparable on the field and in post game photo ops with the fans after Wolfpack victories in 2018.  Alijah will go it alone in 2019 as McKenzie has graduated.  “Losing McKenzie hit pretty hard because I knew I could always depend on him to be there to make the stop if I wasn’t, but I have confidence in some of our younger guys to step up and fill the hole that he left,” Sproles explained.

Another question mark entering the 2019 season for the Wolfpack offense is who will take the reins at quarterback after the departure of Tyler O’Quin?  That void will be filled by junior signal caller Nick Phillips.  Phillips assumes the role having gained valuable experience in late game situations a season ago and will be familiar with the playbook when the Wolfpack take the field against J. I. Burton on August 29.

In 2018, Ridgeview featured a two headed monster in the backfield with Adkins and Matthew Sexton.  Although Sexton has graduated, the Wolfpack may still feature a two back attack this season as well.  Junior Kanin Lewis turned some heads and impressed in Friday night’s benefit game with Chilhowie, a 33-21 Wolfpack victory. 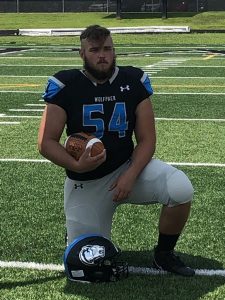 Leading the way for the big boys up front on both the offensive and defensive lines will be senior Brayden Mullins.  The 6’1″, 255 pound bruiser should provide plenty of holes for Adkins and Lewis to scamper through as well as provide ample opportunity for Phillips to find his receivers.

The receiving corps will be led by 5’10”, 155 pound senior Timmy Hess.  On special teams, junior Landon Knepp will be called upon to handle the kicking and punting duties.

The Wolfpack get their season underway on Thursday night, August 29 against the J. I. Burton Raiders at Lawson-Fitchko Stadium in downtown Norton.