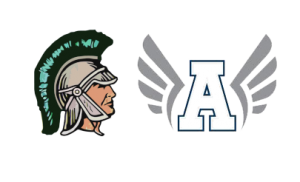 Football in Southwest Virginia is full of great rivalries. This opening Friday night one of those long-time rivalries will continue when the Abingdon Falcons and the John Battle Trojans square off at Falcon Stadium in Abingdon, Virginia at 7:00 PM.  Abingdon and John Battle have faced 60 times with Abingdon owning the series 42-16-1. As of late the Falcons have dominated with the Trojans only winning two of the last twenty seven meetings.

Abingdon brings back a strong team coached by second-year head coach Garrett Amburgey. The defending Mountain 7 champions could be the preseason favorites to win the district again. The Falcons’ defense is powered by linebackers Eli Ratcliff and Justin O’Quinn . Their powerful offense is led by junior running back Martin Lucas and speedy wideout  River Carter should be a force. During last week’s benefit game against Patrick Henry, Martin Lucas and sophomore Christian Foran ran for 200 yards.

Last year the Falcons picked up the win behind the speed and power of Lucas who ran for 126 yards and two touchdowns. The Falcons added over 175 yards passing and two more touchdowns through the air. The Trojans struggled on offense only gaining 138 total yards. Cunningham provided 40 of those yards and the Trojans’ lone score.

This will be a slugfest. The Battle defense will keep the Trojans in the game right up to the final whistle and I wouldn’t be surprised to see a huge upset here.